Ben Hasty is Executive Chef at the Atlantic Grill in Rye, New Hampshire. His focus is on using the bounty of the best seasonal local ingredients. 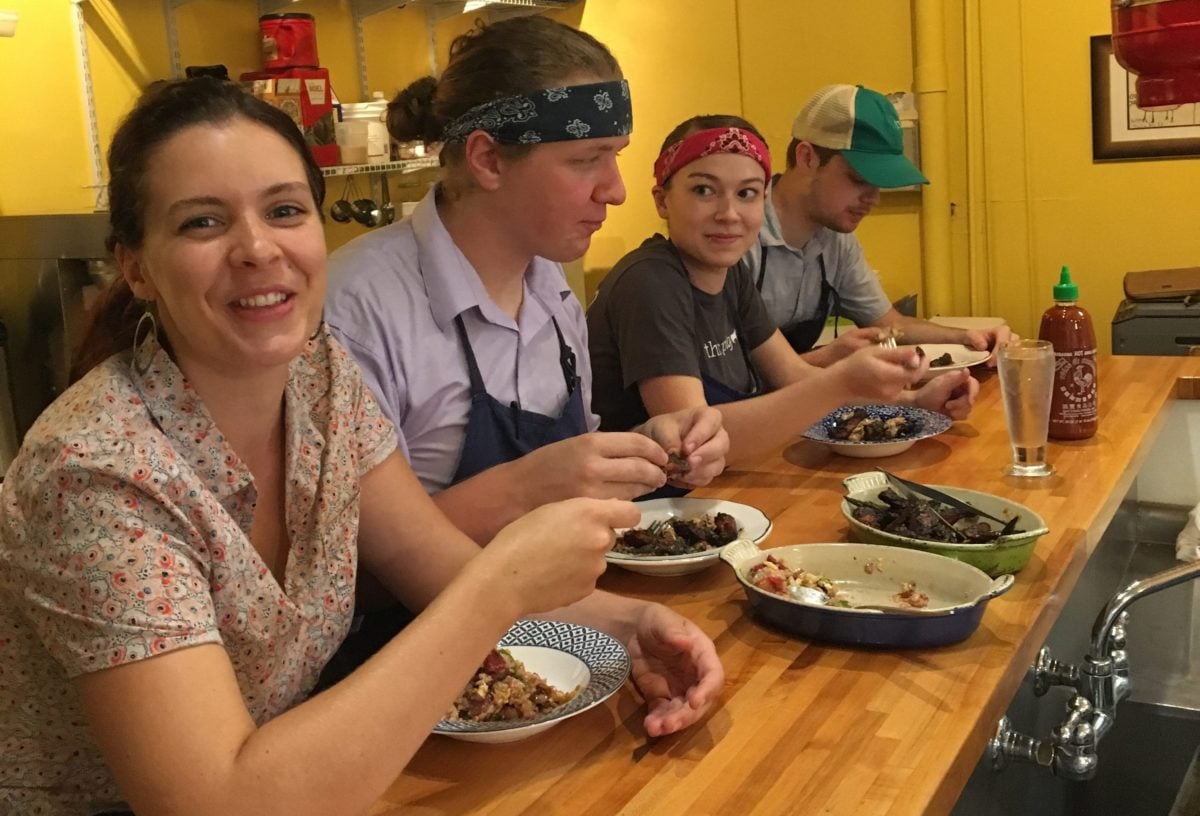 When I began my cooking career in Maine I had never had family meal. Most of the restaurants where I worked offered you a 50% discount on food before or after your shift, and it was your responsibility to make sure that you were fed. Sometimes we were allowed to take a break and make something to eat during down time.

It wasn’t until culinary school that I had the experience of eating a meal with everyone all at once as a structured thing. In classes we would sit through a lecture then divide up into groups, be assigned recipes to make, then everyone would line up and cook the dishes for lunch. During tasting, the chef instructors would discuss what was done correctly or incorrectly in the different prepared dishes. This allowed students not only to learn from the successes of their peers, but also understand the shortcomings and how to correct mistakes. Broken beurre blanc? Here’s how to fix it. Sauce not emulsified? Let’s figure out what step went wrong. Bread crust is incinerated? Make sure the oven is at the correct temperature before starting your project!

Tasting time also allowed students to have some authority, deciding who’s doing what for cleanup, who’s filling out requisitions for the next day, and so on. In a very dictated environment it was a time of democracy where we all, from instructor to the student just barely passing, were equals.

After culinary school, I was off to my externship at the French Laundry — at the time considered to be the best restaurant in the country, if not the world. I was greatly underqualified to be there. Although I was fast and efficient at “low brow” cooking and could easily handle a full grill of steaks, burgers and simple sauté dishes, when it came time for precision work with knife cuts or a mandolin, I was miles behind most of my coworkers.

After a long flight from Maine to the California Napa Valley (my first time on an airplane) I was scared, and feeling that I had perhaps bitten off more than I could chew. On my first day my shift started at 5:30 a.m. (for a 20 year old, making it on time was an almost impossible feat) and I spent my morning confused and cramped. I shuffled from one small perch in the kitchen to the next, working on whatever project I was assigned, never feeling confident that I was doing the right thing (and often I wasn’t). Fear was setting in. Was this going to be my every day? Why did I ever write that letter asking for this externship? How can I ever get anything done on just an 18 x 24 inch space, constantly moving?

Then it happened. Someone walking through the kitchen nudged me and said “family’s up — go get some food.” I don’t think that I had even realized until that moment how starving I was. I walked up to the pass and saw the makings for BLT sandwiches laid out on the hollowed plating table where Chef Thomas Keller worked and helped to assemble all savory dishes. A few bites of white bread, homemade mayo, crispy bacon and juicy tomato later, and I was back to feeling normal. I knew BLTs. The meal gave me a common ground with the more advanced cooks. I realized that everyone has to start somewhere. BLTs today, cauliflower panna cotta tomorrow, right?

The next week I got the chance to make family meal for everyone. I was given ten pounds of pork belly confit trim and fat to use. I had never cooked with pork belly before, so I made my dad’s classic diner “hash” with rendered meat, onion, Worcestershire & potatoes — kinda like a scrambled-up shepherd’s pie. It was rich, fatty and luxurious, and earned me some credit with the cooks who probably found my slow knife cuts a little frustrating.

At my next opportunity to cook for family meal I wanted to impress. I was given a stack of veal trimmings. They were gnarly, tough bits with lots of connective tissue — something that would need to be ground up or slow cooked — so I took it upon myself to make a blanquette with it. I browned it in flour and butter, slow cooked it with white wine, stock, and cream, then served it with rice. The sous chefs liked it so much they had me make more to freeze for later staff meals!

Being a part of staff meal production grounded me during a hectic period of my life. Of all things that I had learned, it taught me that no matter how fancy the restaurant or how intense the environment, everyone needs to eat, everyone needs to take time to connect themselves with their crew. Family meal gave me a chance for my confidence to grow.

Six years later, after a couple of different jobs I was Chef de Cuisine at Brasserie Jo in Boston (located in the Colonnade Hotel in Back Bay). In hotels, especially big ones, there is a cafeteria for the staff. The cafeteria cook had worked at the Colonnade for 15 years and had the benefit of choosing his schedule after his years of service. He chose to take his time off on Saturdays and Sundays to spend time with his family, an amazing thing to be able to do in a career notorious for being difficult to connect with loved ones. This meant that for the weekend my sous chefs and I were responsible for cooking for the entire hotel staff, two times a day, during the busiest part of our work week.

The staff at the Colonnade and Brasserie Jo is the American dream — a blend of people from all over the world working hard and efficiently to serve a very discerning clientele. Cooking for them meant facing an array of health and religious dietary restrictions. There was a tight budget for food, and there were tight deadlines because food needed to be ready in time for different departments’ breaks.

To most, this might seem an impossible hassle. To me, it was one of the most gratifying times of cooking in my life. I connected with people from Morocco, Nepal, Cape Verde, El Salvador, China, and elsewhere. The food I chose to make was globally inspired. I used lots of spices, lentils, rice, slow cooked meats and vegetables to create options that would suit any employee’s needs. I often made dishes like slow cooked chicken legs with tomatoes and curried lentils, pork shoulder with ginger, scallions and chilies, and pollock with capers and brown butter.

The biggest compliment for me was when someone said that the food I made reminded them of home. I’d hear chatter in the hallways leading to the cafeteria about how it smelled like their childhood home, that the food reminded them of how their mom or grandma cooked. There were no frills – no fancy garnish, no expensive ingredients, no flash. But in those pans I put my respect for the community that I was working with, and the honor to have the opportunity to serve the dedicated people who served our guests all week long.

As chef and owner of Thistle Pig, I once again find myself feeding my crew. We work hard in our small space. Multitasking prep, service and receiving with a small crew is not always the easiest thing in the world, but is necessary for a young small business. For lunch, I’ll rotate staff members’ breaks so we can keep working through lunch service. Lunch for the crew is often some kind of sandwich, omelet or stir fly – eggs are king for lunch food! For dinner, after the last rush of the night, I’ll make enough food for everyone to share – a big pot of polenta with roasted vegetables, spicy noodles with miso, meatballs, pasta with chilies and kale, and so on.

After a long day of hard work, front of house and back of house come together, have a bite to eat, talk about what went well, what we can do better, what’s the game plan for cleanup, is there prep to do after dinner, what do you need to prep tomorrow, what do we need for product, sound familiar? It’s an honor to serve my crew, feed them, and make them feel special after they have given their all to feed our community. 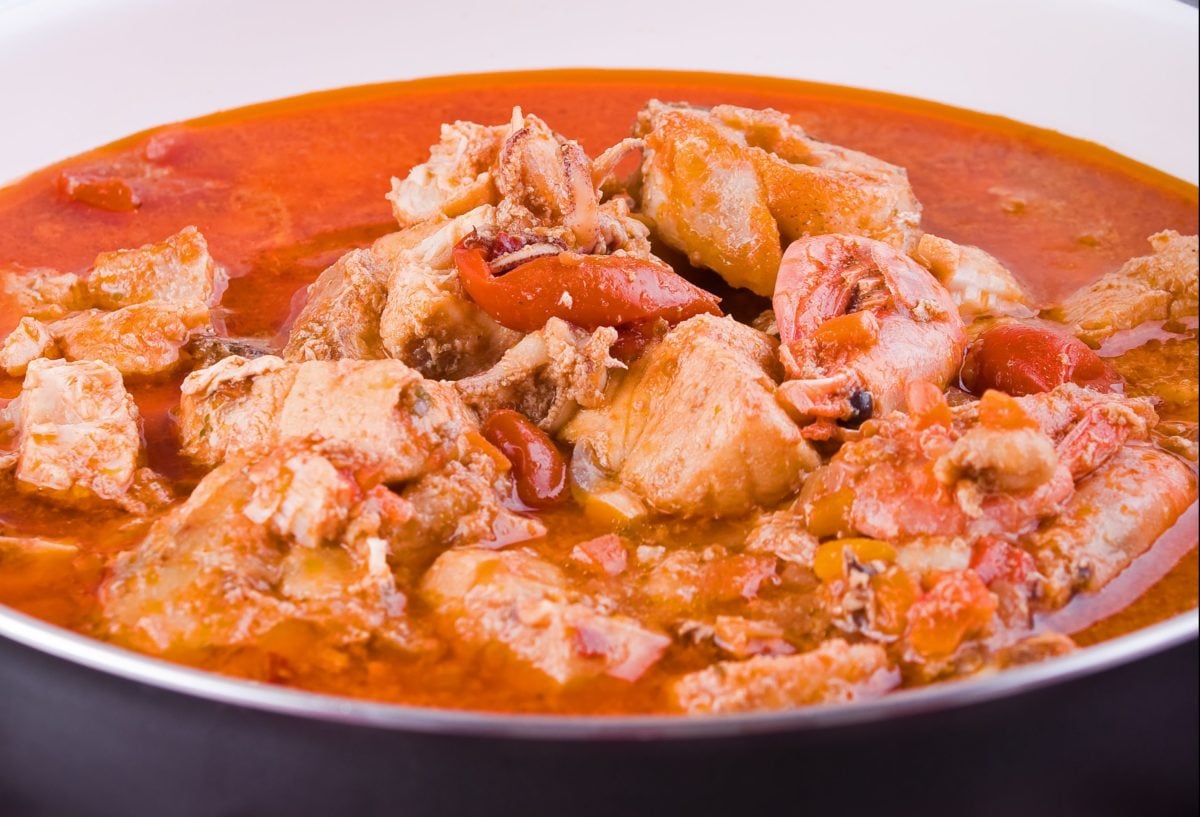 1. In a large wide pan combine the oil, onion, fennel, garlic, and jalapeno. Stir in the coriander, paprika, cumin, and pepper. Cover and sweat over medium-low heat, stirring as needed, until tender but not browned.

3. Add the potatoes and red peppers, and simmer until well heated. Season with salt to taste. “The biggest compliment for me was when someone said that the food I made reminded them of home. I’d hear chatter in the hallways leading to the cafeteria about how it smelled like their childhood home, that the food reminded them of how their mom or grandma cooked. There were no frills – no fancy garnish, no expensive ingredients, no flash. But in those pans I put my respect for the community that I was working with, and the honor to have the opportunity to serve the dedicated people who served our guests all week long.”

2. Combine all ingredients and chill. 2. Run potatoes through the medium blade of a food mill.

3. Using a potato masher, mix in the remaining ingredients. May be refrigerated for up to three days. 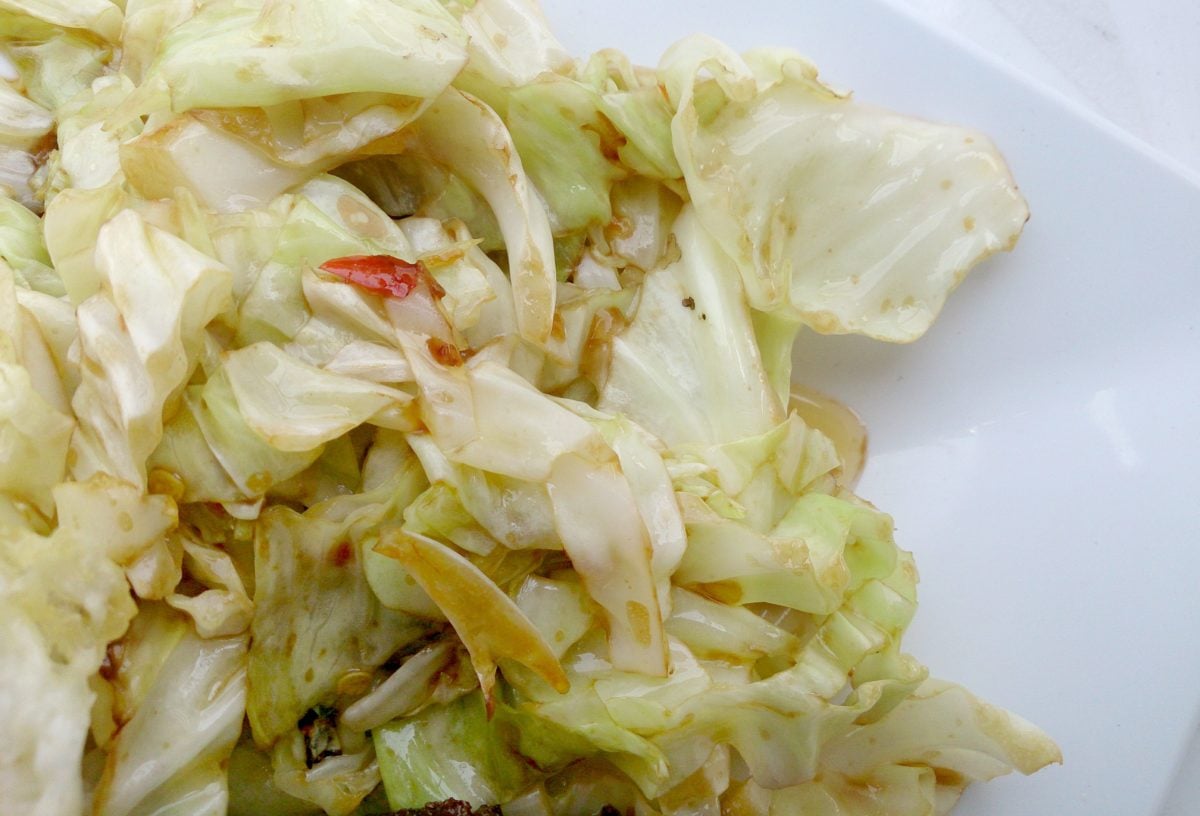 1. Heat canola oil in a large Dutch oven or other pan over high heat.

2. When the oil is smoking, add the cabbage and stir until slightly browned and translucent.

3. Add the salt, sugar, pepper, and vinegar. Let vinegar reduce to a glaze over the cabbage.

Ben Hasty, a graduate of the Atlantic Culinary Academy in Dover, New Hampshire, was just 20 when he started his externship with Thomas Keller at the influential Napa Valley, California, restaurant The French Laundry. He went on to work at other highly-acclaimed restaurants in New Hampshire, Maine, and Boston. He is now Executive Chef at the Atlantic Grill in Rye, New Hampshire. Hasty’s focus is using the bounty of seasonal local ingredients, including from his family farm, Breezy Hill.