Katie Chin is a caterer, cookbook author and blogger who happens to be passionate about Asian food. When my friend Lindsay told me her 10 year old son was allergic to gluten and a week later my friend Nicole mentioned that her 9 year old daughter Lily had also developed a wheat intolerance, I realized how common wheat allergies have become — and not just among adults, but lots of kids too. In fact, an estimated three million Americans suffer from celiac disease, wheat allergies, and severe gluten sensitivities.

My friends were looking for ways to shake things up to make dinner flavorful, interesting and fun despite this new meal planning complication that had entered their lives. At first they were thinking Asian food may be off limits given the amount of soy sauce, hoisin sauce and oyster sauce — that often contain gluten — used in Asian cooking, not to mention the oodles of noodles. This could not be further from the truth because Asian cooking is a rice-based cuisine. There are several ways to adapt Asian recipes to make them gluten-free and many are simply naturally gluten-free to begin with. Let’s take a look at some common Asian ingredients that are friendly to gluten-free diets.

A few years ago, I was getting ready to cook dinner for my bestie, TV personality Jeannie Mai, when she called to let me know she had developed a wheat intolerance. I started doing some research because I cook for her all the time. I learned that traditional soy sauce (shoyu) is made up of 50% wheat and 50% soy beans and that tamari contains no (or very little) wheat. As some brands may contain a small percentage of wheat, I recommend using San-J Tamari. It’s brewed with 100% soy beans (no wheat) and because it’s naturally brewed it also has a richer flavor. This is a particularly easy swap because you can always have tamari on hand in your pantry whenever a recipe calls for soy sauce. When a recipe calls for dark soy sauce, you can add a little brown sugar or molasses to tamari.

This can be a bit trickier because it really depends on the brands for these sauces but the good news is you can now find both hoisin and oyster sauce in gluten-free form. The best strategy is to check the ingredients list if a sauce isn’t marked “Gluten Free” clearly on the label. If you’re on a gluten-free diet, I recommend shopping for Asian sauces at mainstream grocery stores as the brands they carry tend to have better labeling of ingredients and are always listed in English.

As for fish sauce, it’s also important to check the label as some contain gluten and some don’t. Also, some fish sauce brands add hydrolyzed wheat protein which sometimes gets lost in translation and is listed as “hydrolyzed vegetable protein.” It can be listed in Vietnamese as “protein lua mi,” which literally translates as wheat protein. Again, I recommend shopping for fish sauce at mainstream grocery stores where you will find brands like Red Boat or Thai Kitchen, which are gluten-free.

Chinese rice wine (Shaoxing wine) is an aromatic flavoring wine commonly used in braising recipes. Often, wheat is used in the fermenting process which may be hard to identify on labels. I would recommend substituting with dry sherry.

Some sake brands may contain a minute percentage of gluten due to the koji mold used in sake that can sometimes be harvested on barley (but barley isn’t actually used in the fermenting process). If you’re on a very strict gluten-free diet, I would recommend buying the TYKU brand of gluten-free sake.

To Miso or Not to Miso

Miso is a Japanese fermented paste made from beans and grains. Soy beans, chickpeas and adzuki beans are typically used in miso paste and are all gluten-free. Grains can range from rice and quinoa to wheat and barley. Sometimes the grain used is identified in the name of the miso, like brown rice miso, but it’s always safest to check the label to be sure.

Eden Foods produces a line of gluten-free miso pastes made with brown rice or shiro available on-line and in many marets.

Asian cuisine is revered for its noodles and the great news for gluten-free diets is that there is a wide range of naturally gluten-free rice noodles available that can be stir-fried, tossed into soups, deep fried, or served chilled for salads. While you may miss your chow mein or lo mein (both wheat based), you can easily swap out these types of noodles with rice noodles. Rice noodles are sold dried or fresh. The dried variety are most commonly found at mainstream grocery stores while you can find both dried and fresh at Asian markets. Rice noodles vary in size (thick, medium, thin and super skinny) but they’re all made from rice. “Glass” or cellophane noodles are similar to rice noodles but are made from mung beans and are also naturally gluten-free. The best way to prepare dried rice noodles or cellophane noodles is to bring a pot of water to a boil; turn it off and let the noodles soak for 10 minutes; drain and rinse and you’re ready to wok.

My friend Josh suffered through severe dumpling withdrawal when he learned he was allergic to gluten. “How will I live without dumplings?!” he cried. I assured him that there were ways to work around his allergy by making the dough from scratch using tapioca starch, rice flour and xanthan gum. While not as easy as buying dumpling wrappers from the store, he could still get his fix and so can you.

Here’s a tip for when you go out for dim sum: Look for dumplings that are made with rice flour or starches such as steamed rice rolls filled with shrimp or beef or tofu rolls. Other great gluten-free options are sticky rice wrapped in lotus leaves (lo mai gai) and fried sesame rolls. 1. Whisk all the ingredients except the salmon in a small bowl until blended. Pour half of this marinade over the salmon, turning until covered. Cover and refrigerate for 20 minutes.

2. Place the remaining marinade in a small saucepan over medium-high heat. Bring to a boil, reduce heat to medium-low and simmer for about 14 minutes or until the marinade forms a glaze.

3. Pre-heat broiler. Place the salmon on a broiler pan. Broil salmon until cooked through, about 8 minutes.

4. Remove salmon from the broiler. Transfer to a platter and brush glaze over the salmon. Serve immediately with hot steaming rice. 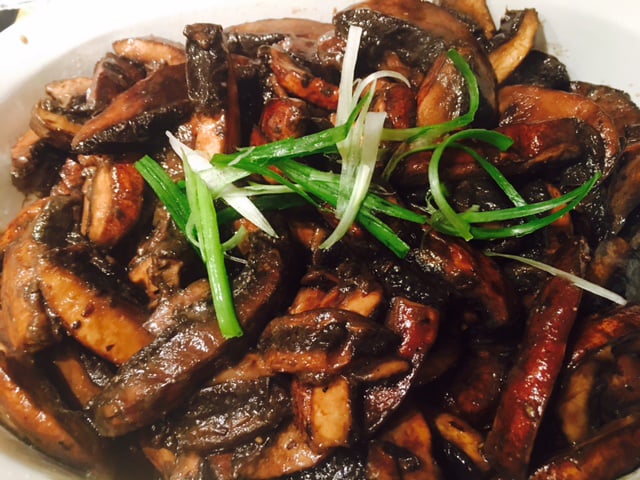 More recipes can be found in

and you will enjoy the recipe for Chinese Glazed Salmon. Makes a great meal with the mushroom skewers.

1. For the marinade: Heat the butter in a sauce pan over medium heat until melted; add the garlic, shallot and green onion and sauté until fragrant, about 30 seconds.

2. Add the miso, soy sauce, sake, chicken broth and oyster sauce and stir for 30 seconds. Allow to cool for 10 minutes. Transfer to a medium bowl.

3. To assemble and finish: Add the mushrooms to the marinade and allow to marinate for 30 minutes.

4. Skewer the mushrooms and grill over medium-high heat until just tender and slightly charred, about 2-3 minutes per side. Brush with remaining marinade occasionally while mushrooms cook. Garnish with more green onions and serve immediately.

Katie Chin, caterer, cookbook author and blogger is passionate about Asian food and believes the very best Asian cooking can be achieved in a real home kitchen by real people on real schedules. 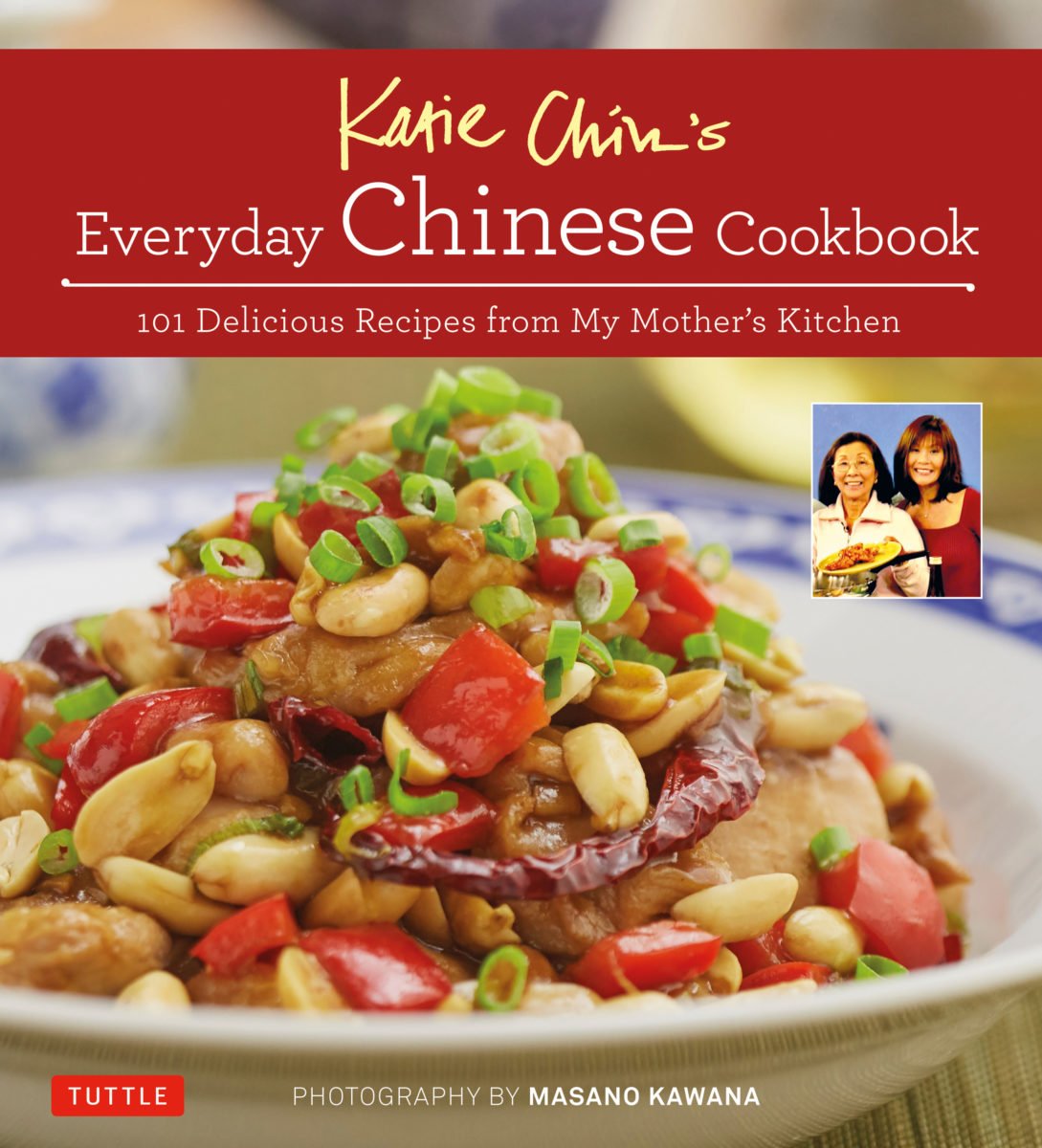