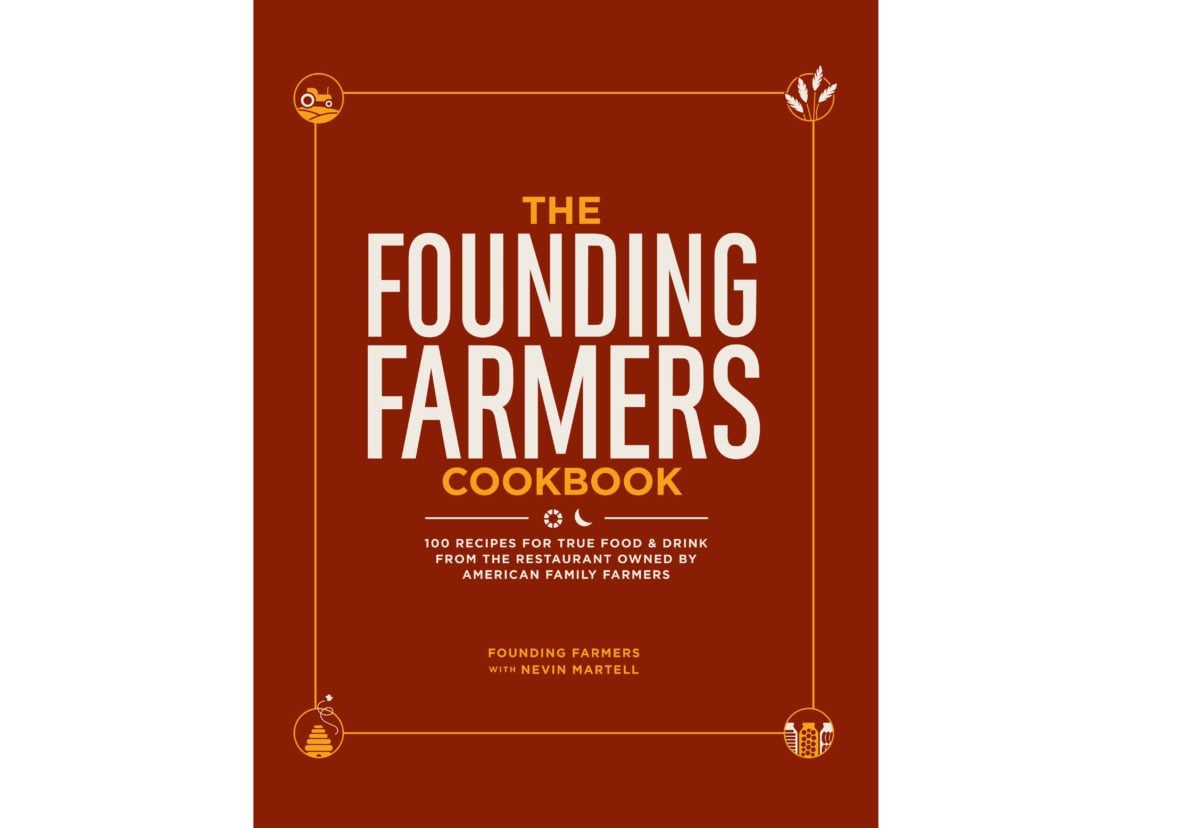 Three blocks from the White House in Washington, DC, Founding Farmers is a stylish high-tech restaurant that locals and visitors alike flock to for breakfast/brunch, lunch, and dinner. The crowd is hip, the décor is modern, the cocktails are crafty, and the food is delicious and prepared with a sassy flair.

The story behind the food, however, is significantly different from most trendy restaurants. It is all strictly “farm-to-table” (also called “farm-to-fork”), a movement to bring fresher, less processed, sustainable ingredients to restaurants across the United States.

In 2004, the North Dakota Farmers Union began to explore the idea of opening their own restaurants to increase profits and consumer awareness by bringing farmers to “the top of the food chain.” They chose the nation’s capital as their first location because the city represents the entire country, with residents from all fifty states as well as from around the world.

Founding Farmers is their flagship restaurant. Opened in 2008, it is a model success story in the farm-to-table, sustainable farming trend. The restaurant has won awards not only for its food, but also for its eco-friendly design and sustainable business practices. It is powered completely by wind energy.

In 2013, Founding Farmers published their first cookbook with one hundred recipes that enable you to bring the artistry of the restaurant’s food to your own kitchen.

While many of the recipes are simple and straightforward (Sun-dried Tomato and Artichoke Skillet Eggs), others require at least 24 hours of preparation to brine or marinate, then more time to prepare the accompanying glaze or sauce (Skirt Steak with Chimichurri Sauce). However, the time spent preparing these more complex dishes is well worth it. I highly recommend the Oven-Roasted Cracked Pepper Wings, but if you make them I suggest doubling the recipe. They’re that good.

The cookbook is a fun one to look through. It’s well organized, has lovely photographs, and has great quotes about food from both foodies like Julia Child (“People who love to eat are always the best people.”) and from people who are famous for… other things (“Hunger is the best pickle.” Benjamin Franklin, Founding Father).

The book encourages its readers to “cook with the season,” to buy from local family farms and ranches, and to shop at farmers’ markets.

Also to remember, in my favorite quote from the book (a Native American proverb):
“Before eating, always take a little time to thank the food.” To add a rustic flourish in the spirit of campfire cuisine, we cook wild salmon on a cedar plank. This imbues the fish with a softly smoky flavor, while adding a little char and a deep caramel glaze. We recommend using each wooden slat only once (don’t throw it away, though; it makes great kindling). You can, of course, grill the salmon on the planks on an outdoor grill as instructed on the cedar planks, but we are giving you an indoor option for rainy days and apartment-dwellers. You must soak the wood for at least 3 hours and up to 24 hours before it goes in the oven, so it won’t catch fire. The plank will still smoke, so make sure to disarm your smoke detector — unless you’re soothed by the sound of Klaxons blaring. Not in the mood for salmon? This recipe works well with most any high-fat, steakstyle fish, such as swordfish, grouper, mahimahi, wahoo, and halibut. You will need 2 cedar planks for this recipe.

2. Combine the preserves, maple syrup, Dijon, cumin, cayenne, 1 teaspoon of the salt, and the lemon juice in a small bowl and mix well. Set aside.

3. Remove the cedar planks from soaking, shake off any excess water, and place the planks on a baking sheet. Brush the salmon fillets, generously, with the olive oil on each side and season with the remaining ½ teaspoon kosher salt and the black pepper. Place 2 fillets on each plank. Cover the baking sheet with aluminum foil and bake for 4 minutes. Remove the baking sheet from the oven, discard the foil, and turn the oven to the broiler setting. Brush each fillet generously with the glaze. Place the pan back in the oven on the topmost shelf. Broil for 2 minutes, then remove the pan from the oven and glaze the fillets once more. Broil for 2 to 3 minutes longer, until the glaze is caramelized. Serve immediately with the lemon wedges. If they made a Mount Rushmore for American food icons, apple pie would be front and center in the granite lineup. To make our crowd-pleasing version of the classic, we use a blend of apples. Granny Smiths possess an unbeatable tartness and retain their shape in the oven. We like to pair them with Golden Delicious apples, but you can mix up the blend. Just remember that eating (dessert) apples aren’t generally good for baking, since they turn mealy in the high heat of the oven.

*Find the recipe for the Caramel Sauce here

Combine all of the filling ingredients in a large bowl, tossing the apples to coat them evenly.

In a small bowl, combine the streusel ingredients and mix together with a wooden spoon until the texture is crumbly.

When you are ready to assemble and bake the pie, preheat the oven to 177° C/325° F and place a rack in the lowest position. Roll the pie dough out on a lightly floured surface with a rolling pin to ¼ inch thick. Line an ungreased pie pan with the dough. Fill the bottom of the pie shell one third of the way full with the filling, about 1¼ cups.

Spread the streusel topping evenly over the entire surface of the pie. Place the cream in a medium saucepan and bring to a boil over medium heat. Decrease the heat to very low to keep warm.

Place the sugar and water in a medium heavy-bottomed saucepan and place the pan over medium heat. Do not stir. Let cook until the sugar melts and the mixture turns a golden amber color. Remove the pan from the heat and stir in the heavy cream until well mixed. Let cool.