The Simple Pleasure of an Open Faced Sandwich

Discovering a region's favored open-faced sandwich is a simple yet delightful experience. I have been a food writer and editor for more than 30 years. As such, I have been blessed with the opportunity to dine at some of the finest restaurants in the world. And while I marvel at the time and talent it takes to prepare a meal at a Michelin 3-star restaurant, I must admit that my true culinary preferences lie elsewhere.

Perhaps my taste for simply-prepared foods started when I took my first trip to Europe. I was 19 and my family had just moved to London. I had finished two years of college and took a year off to join them. Before London we had visited Amsterdam and I’d become enamored of the canal house breakfasts of slices of dense dark bread offered up with butter, ham and cheese. In London, there was a bakery on the Kings Road around the corner from our little Chelsea flat that sold big, beautiful uncut loaves of white sandwich bread, crusty on the outside and squishy on the inside. A thick slice of that bread layered with salted butter, smoked salmon, cucumber and watercress, or slathered with orange marmalade and slices of genuine Cheddar cheese, was unlike anything I had ever tasted.

A year after returning from London I backpacked on the cheap through Europe for several months, and just about lived on open-faced sandwiches. Wherever I was it was easy to get some bread, cheese and cured meat and slap them together for an inexpensive, nourishing and delicious lunch or dinner, whether at the park, the beach or a town square. And each layering of local ingredients told a story of place: baguette, Brie, and jambon de Bayonne in France; ciabatta, pecorino, and prosciutto in Italy; and country bread, Manchego and  jamón de Serrano in Spain.

On that backpacking trip I was lucky enough to stay with a family in a little mountain town called Rocca di Mezzo in the rugged region of Abruzzo, Italy. The family owned a trattoria and each morning we would head on horseback into the surrounding mountains and fields to pick wild greens. The greens were later sautéed in olive oil with garlic and piled high atop grilled bread for bruschette, which were as singular and luscious as the gathering experience was unique.

The traveling did not end there nor did the inspiring single-sliced sandwiches. I lived in Paris for two years, made many trips to Sweden, and traveled repeatedly to France, Italy, Spain, Mexico and throughout the British Isles for work over the course of twenty years. Most recently I took a heritage trip to Germany and Poland. And in every country I visited, I discovered sandwiches that were utterly captivating. They could be as simple as a piece of Poilâne bread spread with aged goat cheese at La Tartine, a scruffy little wine bar I love in Paris, and crostini of unsalted bread topped with classic Tuscan chicken liver spread that I was served on the terrace of a friend’s house outside of Florence. I bought grilled bread rubbed with garlic and the cut half of a juicy tomato at a stand at La Boquería food market in Barcelona, and petite squares of rye smeared with dill butter and dotted with diminutive shrimp at a konditori in Stockholm. An elegant coffee house in Berlin served pumpernickel slathered with quark, and just about every restaurant in Poland served chewy dark bread spread with smalec — rendered white pork fat flavored with onion, garlic, spices and pork cracklings. I had canned beans on white toast in a caf’ in London, and a split roll mounded with beans, melted cheese and salsa at a workers’ restaurant in Mexico City.

I realized that when I was a child my mother fed me open-faced sandwiches without calling them such. For her, using one piece of bread was more about cutting calories than about culinary creativity, but it was probably also the vestige of growing up with a Russian mother from a poor background, for whom eating a slice of pumpernickel or rye topped with boiled tongue, chopped liver, herring, or thin slices of onion and radish had been a way of life. So by feeding me things on toast— cottage cheese, tuna salad, egg salad, melted cheese, poached eggs, sliced salami — she was passing down a tradition. There are open faced sandwiches all over the globe and part of my pleasure in travel is in discovering them wherever I go. 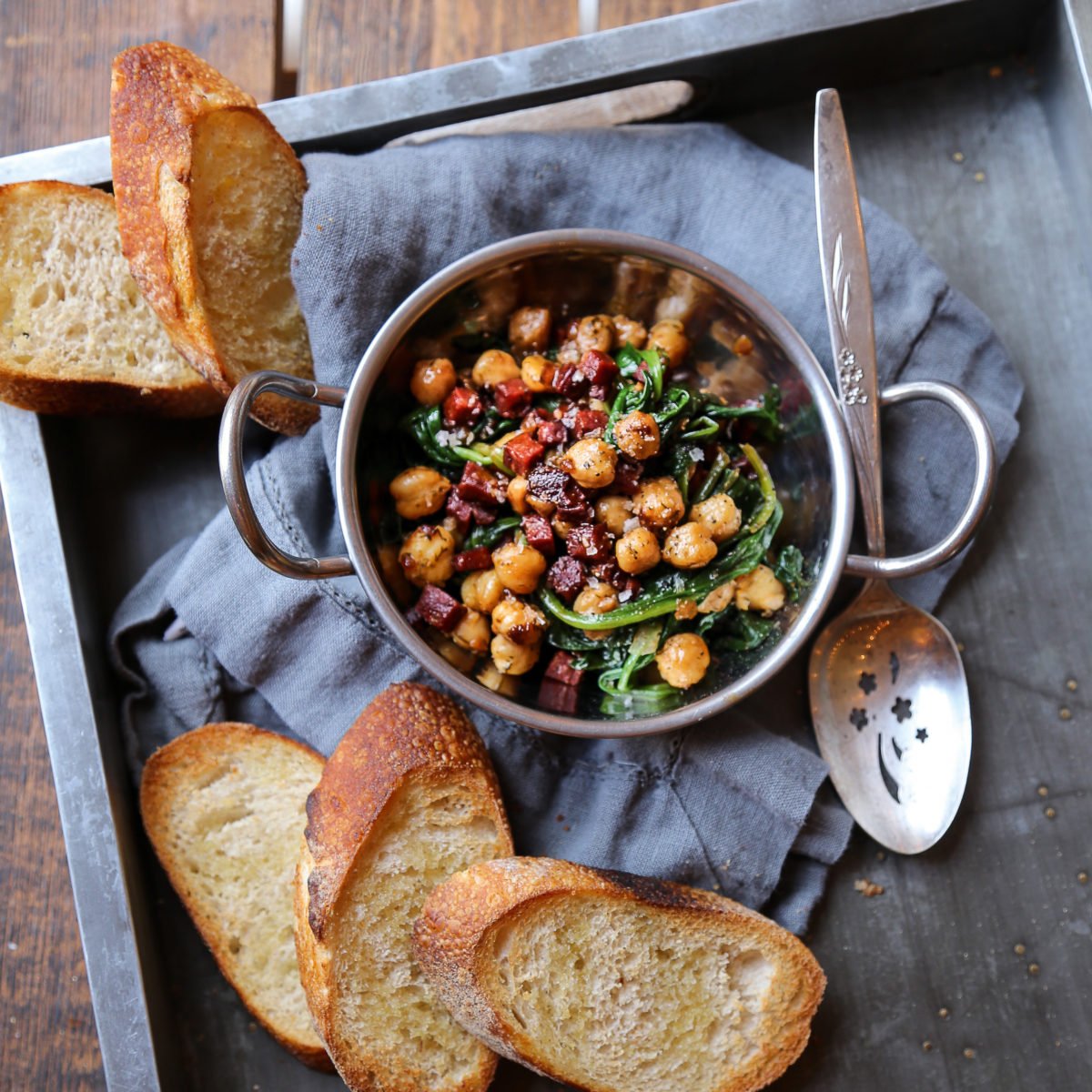 Spinach is a particular favorite in the large southernmost region of Andalucía (Andalusia), and at tapas bars there, especially in Seville, you will often find a dish of spinach and chickpeas. Here I have added some chorizo for extra flavor. Remember that Spanish chorizo and Mexican chorizo are different. While they are both pork sausages, Mexican chorizo is sold uncooked and is usually removed from its casing, while Spanish chorizo is sold cooked and can be sliced and eaten as you would salami, or it can be heated up. Make sure you buy Spanish chorizo for this dish; whether you buy sweet or spicy is up to you. (If you cannot find it, you can use a sausage such as kielbasa.) I flavor this dish with pimentón, Spanish paprika, and once again, choose sweet or spicy according to your taste. Since chickpeas are devilish creatures, threatening to roll off the bread at every bite, I call for mashing them slightly to mitigate that problem. But if you live for adventure, just forget about that step and leave them whole. Uncork a younger, lighter Tempranillo from Rioja or Ribera del Duero to complement the assertive flavors here.

2.  Add spinach and stock; sauté until spinach is wilted and dark green. Add chickpeas and 2.5 ml (1 ⁄2 teaspoon) pimentón and cook to heat through, pressing down on chickpeas with potato masher to smash slightly. Season with salt and pepper, adding additional pimentón if desired. Spoon mixture into a serving bowl. Drizzle with extra virgin olive oil and sprinkle with parsley. Arrange toasted bread on a platter and serve. Egg salad is an open-faced sandwich favorite all over the Western world, and I love it in every rendition. This one is a takeoff of one of my favorite chicken salads. I line the bread with watercress for some color and crunch, but if you can’t find it, use baby spinach leaves instead. I prefer Major Grey’s chutney, which is a type of chutney rather than a brand, and is made by several manufacturers, but feel free to use whatever mango chutney you like. Try this for brunch, lunch, or supper. Pair this with a bone-dry white Kerner from the Alto Adige in Italy.

2. Toast bread. Arrange toasts on a platter or individual plates. Line each toast with watercress. Mound egg salad atop watercress. Sprinkle 15 ml (1 tablespoon) cashews over each toast and serve.

This is one of the simplest and most satisfying crostino there is. You need very few ingredients and very little time to throw together an appetizer that is sure to please. I buy the Quattro Formaggi (four cheese) mix (asiago, Parmesan, fontina, and mild provolone) at Trader Joe’s, but it is also sold at other stores. Of course, you can use any kind or combination of grated Italian cheeses you want, though not mozzarella as it is too stringy. Almost any Italian red would complement this treat, so choose your favorite: one of mine is Montefalco Rosso from Umbria.

If you use chicken or turkey sausage, you will probably have to add more oil to the skillet.

*Conversions by The Cook’s Cook.

1. Heat oil in a medium-size heavy skillet over medium heat. Remove sausage from casings and place sausage in skillet; discard casings. Cook sausage until cooked through, breaking up meat with a wooden spoon or pressing meat with a potato masher if finer texture is desired. Using a slotted utensil, transfer sausage to a bowl, leaving rendered fat in the skillet. Pour off all but 1 tablespoon fat from the skillet. (If not enough fat has been rendered, add olive oil to make up the difference.) Add onion and sauté until softened, about 10 minutes. Add garlic and sauté until fragrant, about 30 seconds. Transfer onion and garlic to the sausage and mix well. Add 1 tablespoon oregano and mix well.

2. Preheat broiler. Arrange crostini on baking sheets. Add cheese to the sausage mixture and toss well. Mound mixture onto each crostino. Broil until cheese melts. Transfer to a platter, sprinkle with fresh oregano, and serve immediately.

Karen Kaplan is a freelance writer, editor, translator and recipe developer. She was on staff at Bon Appétit magazine for twenty years. She was also the restaurant critic for the L.A. Weekly, a radio host, a consultant for culinary websites and food-based reality television shows, a contributor to national and international food and travel magazines, and a writer and recipe developer for several major cookbooks. She graduated from La Varenne École de Cuisine, has taught at USC and UCLA and speaks Spanish, French and Italian. She lives in Studio City, California, USA.