Eggs, the perfect food. If it were true that man cannot stand too much perfection, then we would not have the egg. And without the perfect egg we would have neither cakes nor custards, no crème caramel or brûlée, no quiche, no Angel’s Food cake and no bearnaise and hollandaise, and therefore no Eggs Benedict! There would be no zabaglione, no chocolate mousse or eggy gelato, no bread pudding or French toast. Nor would there be dozens and dozens of delights in which eggs work their inimitable magic, leavening, binding, thickening, enhancing, and enriching. And I haven’t even mentioned all the dishes in which the egg is the star. Deviled eggs, egg salad, egg sauce, eggnog and breakfast sunny side-up, over-easy, scrambled, poached, coddled, shirred, have-it-your-way eggs.

Hold perfection in your hand for more than the moment you give it before plunging it into boiling water, cracking it on the edge of the pan before frying, or the bowl before scrambling. Just look at it. Perfection. The egg is commonplace, but it is also a potent symbol imbued with centuries of reverence and regard.

Only during the spring does the egg get anything close to the attention it deserves. After all, when but during the days before Easter is the egg more carefully examined? Cosseted and coddled, so to speak. The pastel painted eggs are nestled in the Easter basket, alongside foil wrapped egg-shaped chocolates and too-cute-to-bite bunnies. This doesn’t begin to tell the tale. The history of the iconic, symbolic, legendary egg emerges from the mists of time thousands of years ago. Eggs and birds have been around far longer than historians. Egyptian and Chinese records show that fowl were laying eggs for consumption as early as 1400 B.C. E. More than food, this bit of life encased in a brittle shell assumed symbolic importance from the beginning of civilization. The Phoenicians believed the very creation of heaven and earth began with a primordial egg breaking apart. In an interesting inversion, Ptah, god of the ancient Egyptians, is said to have created the egg from the sun and moon. According to Native Americans the world was created when the Great Spirit burst forth from the giant golden egg and created the world.

Early Spring festivals, welcoming the sun’s return from its long winter sleep, were part of every early civilization. And the egg would play its part.

Easter, a rite of Spring celebrating Christ’s resurrection, which has its antecedent in the risen Adonis, is no exception. Blessed, colored, eaten, displayed and exchanged, the egg had long been associated with the change of season, and proof of the renewal of life.

Soon after the date for Easter was astronomically fixed in 525 CE, decision makers within the church made eggs forbidden during Lent. Since you could not, however, stop hens from laying, there was a glut of eggs on the market. This surplus may have inspired the hard boiling and decorating of eggs that became part of the Easter celebration.

In Germany, emptied eggshells are painted, decorated with lace and ribbon, and hung on a small leafless tree. Poles, Slavs and Ukrainians share an enduring tradition of elaborately decorated Easter eggs. Every dot, line and cross hatching in the pattern is meaningful. Yugoslavian Easter eggs bear the initials “XV” for “Christ is Risen,” a traditional Easter greeting. In Imperial Russia, Easter was celebrated with far more fanfare than Christmas. The tradition of the decorated Easter egg reached its zenith during the time of the final Tsar, Nicholas II, when exquisite, bejeweled eggs were commissioned from the goldsmith Peter Carl Fabergé.

These precious eggs, made of gold, rock crystal, decorated with diamonds, amethyst, and rubies, often concealed something even more extravagant within. All this artistry and indulgent expense was meant merely to charm and nothing more. No wonder the serfs revolted.

Rolling and hunting for Easter eggs has long been an important part of the Easter holiday in England and the US. Brightly colored eggs are called ‘pace eggs’ in England, after pascha, Latin for Easter. They are said to symbolize the rolling away of the stone that entombed Christ. The egg and Easter are inseparable. 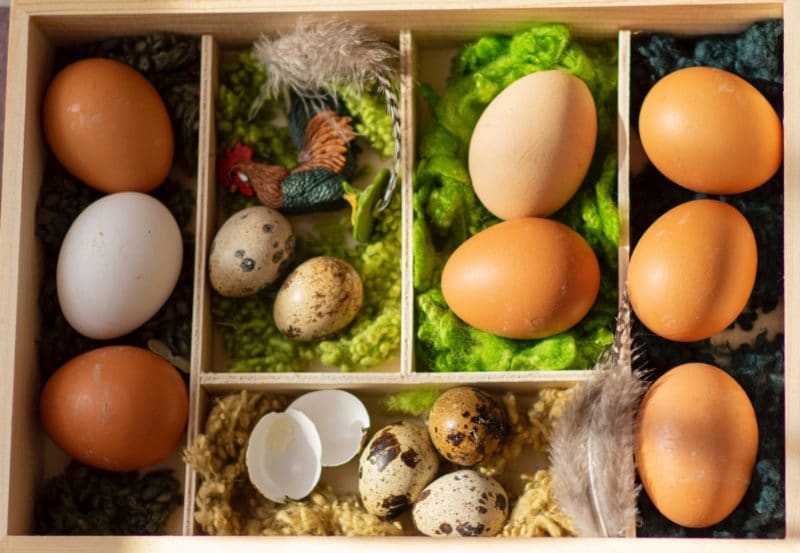 Look at perfection again. Neat, huh? To those of you who have abandoned the egg in favor of gagging down a bowl of dusty cereal flecked with hard bits of dried fruit — rejoice! The neatly self-packaged egg is also food perfection. Each egg is a mere 70 calories and is loaded with what’s good for you: potassium, protein, calcium, iron, thiamine, riboflavin, vitamins A, B-6, B-12, phosphorus, and zinc. Eggs also provide lecithin, which contains a phospholipid, acetycholine, that has been demonstrated to have a profound effect on brain function; and lutein and zeaxanthin which promote eye health. And that’s just one egg, and who eats just one?

Convenient, tasty, essential, primal — the egg is undeniably part of life. It fits into any setting, casual or formal, and is always there when needed. So join with me to intone the words of the American poet, Clarence Day:

Oh, who that ever lived and loved

Can look upon an egg unmoved?

The egg is the source of all.

Oh, join me gentlemen I beg.

In honoring our friend, the egg. For the Hollandaise Sauce:

For the Hollandaise sauce (prepare and keep ready) :

Beat the yolks in 15 ml (1 tablespoon) of water over a double boiler until they begin to thicken. Work the butter in a little at a time, allowing each piece to be incorporated before adding the next. When the butter is all in and the sauce is fairly thick, then add the lemon juice slowly, beating all the while. Continue beating until a rich sauce-like consistency is achieved. Salt to taste. Keep warm at room temperature.

Hint: Should the mixture begin to separate before the addition of the lemon juice add the juice immediately beating furiously to save the mixture; however, this doesn’t always work.

For the eggs: Heat a pan of water to just below a boil. Add the vinegar. Carefully break the eggs into the water keeping each egg at a little distance from the next in a clockwise rotation so that you know which one went in first.

Allow the eggs to gently poach. Have a slotted spoon handy to remove them from the water.

Meanwhile, toast the muffins and paint them with some cream cheese. Set a half slice of smoked salmon on each and put them on plates. The eggs should now be ready. Starting with the one that went in first pull them from the water with a slotted spoon and allow to drain a few seconds onto a towel held under the spoon. Carefully place a poached egg on each salmon topped muffin. When all eggs are in place, top with Hollandaise sauce, garnish with parsley and lemon slice and serve immediately. Zabaglione with Fruit is an exquisite dessert made with just three ingredients. Often made tableside in restaurants, it is simplicity itself. Sweet Marsala from Sicily is the traditional flavoring, but orange flavored Mandarine Napoléon, Limoncello, or even Frangelico are also very pleasing. Mind what you are pairing it with.

Beat the eggs until frothing in a round bottomed zabaglione pan, or in the top of a double boiler with tablespoon of water for each egg used. Place pot over water at the high end of a simmer and beat in the sugar. Beat, beat, beat until thickened. Slowly drizzle in the Marsala (or liqueur of choice) beating all the while, over the heat until thickened but not thick.

Serve hot or at warm room temperature over strawberries (or other fruits — as you like) in a goblet, or plated.

Garnish with crushed Amaretti or biscotti, or serve a whole cookie on the side.

He is a former chef and restaurateur with establishments in Philadelphia and Bermuda, a TV and Radio presenter, and Assistant Professor teaching a range of courses including Food in the Arts, and Cuisine and Culture at Drexel University and Delaware ValleyUniversity.

Reach him at [email protected]