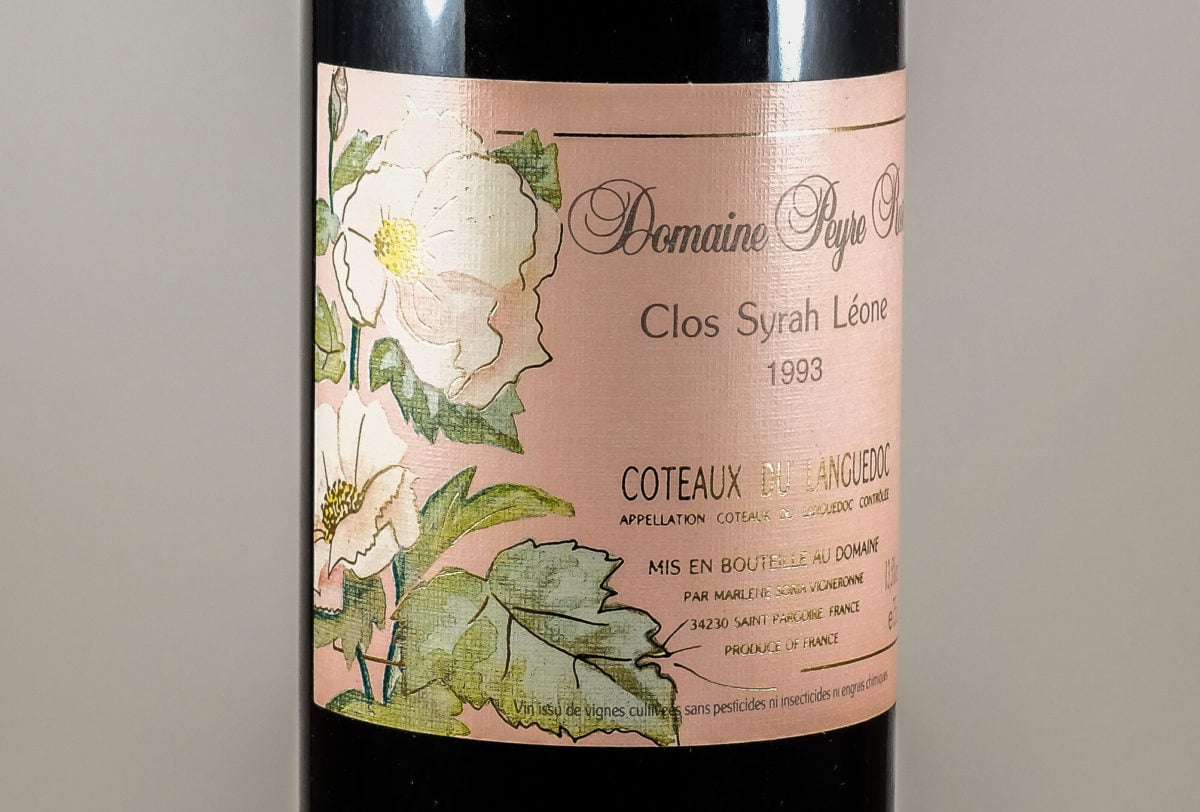 Syrah is one of the finest and most important wine grapes in the world. This is recognized in France, certainly, and to some extent in Australia, where it is usually called Shiraz.

But in the United States, not so much. A few years ago, in an article for Forbes entitled America’s Syrah Problem, Katie Kelly Bell began: “It’s easier to get rid of a case of syphilis than it is to get rid of a case of Syrah. So goes a long-held axiom among wine retailers in the USA. Funny, but sadly, quite true. It’s a terrible case of discrimination really — Many see Syrah Taint…”

The greatest Syrah-based wines come from France’s Northern Rhone Valley. But the wine that’s our present Odd Bottle is from the Languedoc, to the south, which is, according to Jancis Robinson, whose adoptive home it is, the world’s biggest wine region and the French region first introduced to vine-growing, by the Romans.

For most of its history, the Languedoc was known for simple red wines called Vin de Table. Robinson calls these “wines no one wants to drink” and writes, “One of France’s pressing problems is how to transform the Languedoc” into a region in which fewer producers “concentrate on the medium to high quality wine of which the region is demonstrably capable.”

Such wine was being made almost thirty years ago by a former real estate agent named Marlène Soria, who was in the process of selling a property when she decided to buy it for herself, solely for its beauty. Only later did she realize that there were some old vineyards on her land. A few years later, 1991, she produced her first Syrah-based wines.

And only a few years after that did I discover not, alas, so fine a property to buy and make wine on (for which the wine world should be grateful) but the wines being made by Marlène Soria. I bought a half-case each of her 1993 Clos des Cistes (with 15% Grenache) and 1993 Clos Léone (with 15% Mourverdre).

Now, 25 years after the harvest, the latter serves, lucky us, as our Odd Bottle. This is one of the first Odd Bottles, many considerably older than this, with any ullage.

As I’ve written elsewhere, ullage (pronounced ull [rhymes with hull, not with full] idge, emphasis on the first syllable) means, in a sense, the nothing that’s there: the wine that’s missing from the bottle, between the bottom of the cork and where the wine begins, known as the pour line. The wine that’s gone has become what is called, more often in whiskey-making and referring to what liquid is lost through evaporation, the angel’s share. Ullage can occur also because of leakage through the cork (caused usually by excessive heat), and this leaves a wine bottle both uglier with label-stain and more at risk.

In the matter of this Clos Léone, the ullage, visible but minor, was only about a third of an inch from the cork down toward the shoulder.

The cork fractured but stayed wholly intact. It looked like an old face with beautiful wrinkles — like W.H. Auden’s, say, or as if there had been a deep-reaching earthquake in Corkville — a corkquake, perhaps.

Since this is a “fancy,” or “serious,” wine, the date of the vintage is imprinted on the cork. Here, on the top of the cork.

On the side, the cork says “Peyre Rose Marlène Soria.” Good for her — if I’d made this brilliant wine, I’d want to put my name on the cork as well.

The aroma of this wine (leathery, smoky, meaty) foretold the taste, which doesn’t happen all that often. A nose may know what a nose knows, but it only intermittently mouths off about what the mouth will soon experience.

In this case, the first mouthful (though it was really only the customary small sip for swishing about throughout the mouth) was as satisfying as I’d experienced in a long time.

I kept going back for a bit more, when I was supposed to be finishing up some white wine for an Odd Bottle column already being written.

This Peyre Rose was Wine as Seducer.  Indeed, Wine as Transgressor. It nearly forced itself upon me with its complex manipulation of my mouth, enticing and fulfilling simultaneously. How few wines, let alone lovers, can do that: promise and fulfill promise at once, as if in pleasurably deviant violation of time?

On the wine’s first night in our kitchen, it was served with a crown roast of pork with rosemary and black pepper. Were it not for its age, this Syrah wine might have overwhelmed a dish usually paired with a lighter red, like Merlot or Sangiovese. It didn’t.

On Day 3 it was served for lunch with an amazing Spicy Prosciutto Spread called, on its label, ‘Nduja, with, yes, a single opening single quotation mark, no closing quotation mark, as if to say, “You may enter here, but no one ever leaves….”

Okay, it was probably an apostrophe, but nowhere can I find what letter or letters have been omitted. ‘Nduja, which is pronounced in-DOO-jah, originated in Italy in Calabria, and when I tasted this spread I was positive that it had come from Italy. Wrong!  When I read the label, I learned it had been made by La Quercia in Norwalk, Iowa. (Yes, but the owners of La Quercia had lived for three and a half years in Parma! Of course.)

This Prosciutto Spread was accompanied by an amazing cheese, Pecorino alla Canapa Fulvi, a sheep’s-milk cheese from Emilia-Romagna. In this case, our Syrah performed as a bigger wine, as appropriate for this combination as the Cabernet Sauvignon most often recommended for it.

Day 4, lunch: the wine was finally beginning to tire, losing a bit of its bite, and its fruit, and, understandably, its color. and yet…with chicken in kumquats, dark meat, it seemed to regain both its spirit and its body and was a fine match.

Day 4, dinner: with rib roast rubbed with ground guajillo pepper (relatively mild, slightly sweet) and a touch of clove and oregano. I know we drank something else with this, because there was almost none left of the 1993 Domaine Peyre Rose Clos Léone Syrah. But whatever we drank is gone from memory, but this wine is, truly, not just history but historical.

What happens to all the wine we drink? Not literally — let’s not be vulgar here.

If wine is, as it’s sometimes said to be, something spiritual, ethereal, as great an expression of fruit as Mozart’s Mass in C major is of both man and music — if wine is all of that, then what are we when we drink wine, when we take it in and absorb it and it becomes us?

We may not be immortal — and who or what would want to be, really? — but we are alive, beyond our dreams and forecasts and expectations. We are fresh with age and alive with promise.