A Revelation! A Tragedy! 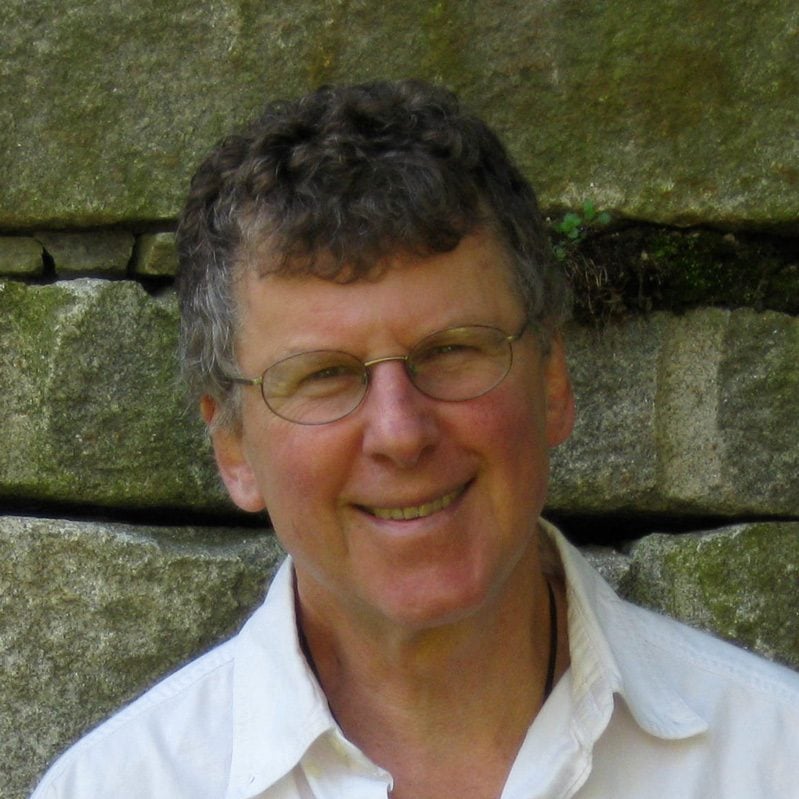 The Odd Bottle concerns itself on occasion with odd bottles that are from what might be considered odd grapes, like Alicante Bouschet and Charbono and Semillon…well, I don’t think Semillon’s odd, though I’m not sure many people have drunk a wine made from 100 percent Semillon, and Jancis Robinson’s first words about Semillon in her important book about grape varieties are these: “Semillon is a very odd grape indeed.”

In any case, there’s nothing odd, or obscure, or distant, or unfamiliar about Cabernet Sauvignon. In the (further) words of Jancis Robinson, Cabernet Sauvignon is “the world’s most famous red wine grape, and most planted of any colour.”

Most of us have drunk Cabernet Sauvignon, whether in a wine made of no other grape or in a blend, as almost every red Bordeaux wine is made of Cabernet Sauvignon blended usually with Merlot and Cabernet France, and Cabernet Sauvignon is blended with other grapes not only in the south (not Bordeaux) of France but also in, among other countries, Spain, Italy, Lebanon, Chile, South Africa, Australia, the United States, Antarctica…okay, not the last, where it’s presently too cold to grow Cabernet Sauvignon but someday, with global warming, probably won’t be and we (well, our descendants) can look forward to Haines Mountains Mountain Red (“a blend”).

So the grape isn’t odd. The wine made from it isn’t odd. But the wine under consideration here is decidedly odd.

The 1984 Byrd Cabernet Sauvignon is from Maryland. It’s the only wine I’ve ever drunk that was made in Maryland (yes, I’m that provincial). It (almost) made me want to move to Maryland if I can be close to the making of wines as great as this wine proved to be.

I learned from a 1986 article in the Easton, Maryland, Star-Democrat that this wine is itself a blend: 78 percent Cabernet Sauvignon, 11 percent Merlot, 11 percent Cabernet Franc (which is to say, as above, what is called a Bordeaux blend). There is nothing on the label to indicate this, as there usually is not in any country or demarcated wine-making area.

I do wish all wine labels listed all the grapes and their percentages, though I can see how this might make for small print in wines like Châteauneuf-du-Pape, which can be a blend of as many as thirteen grapes, or might be resisted by American winemakers, who may call a wine, for example, Cabernet Sauvignon so long as at least 75 percent of the wine is made from Cabernet Sauvignon (or whatever grape they use for naming what they may not want their customers to know is a blend).

Byrd Winery was founded in 1976 in Mount Airy, Maryland, by the married couple Bret and Sharon Byrd. According to Regina McCarthy in Maryland Wine: A Full-Bodied History, Byrd became known for “releasing some of the best Cabernet Sauvignons in the history of the state industry.”

Michael Dresser, writing in the Vintage Point column in the Baltimore Sun in 1991, said that Byrd produced, “the finest cabernet sauvignon on the East Coast” (as well as what Robert Parker called, “’America’s very best gewürztraminer.’”)

Frank Prial, esteemed former wine columnist for The New York Times, wrote in 1984 (the same year as the vintage of our odd bottle) of an immense tasting of wines from all over America, carried on by what he called, “Good judges…people with a lot of experience in blind tastings.” The tasting was organized by the Beverage Testing Institute and held at the Culinary Institute of America. There were 176 wines tasted, three from Maryland, 125 from California, “which dominated the tasting” in terms of quantity and quality, except… “there were a few surprises. Among the top cabernet sauvignons was a 1980 entry from the Byrd Vineyards in the Catoctin Valley of Maryland.”

The Catoctin AVA (American Viticultural Area) is in western Maryland. It is comprised of about 170,000 acres, its soils of schist and limestone. Presidential retreat Camp David is located there but no longer much in the way of grapes and wineries. The only extant winery, Catoctin Breeze, identifies its wines as coming only from the Maryland appellation.

Compare that to what was on the label of this odd bottle:

There’s some well-earned pride for you. 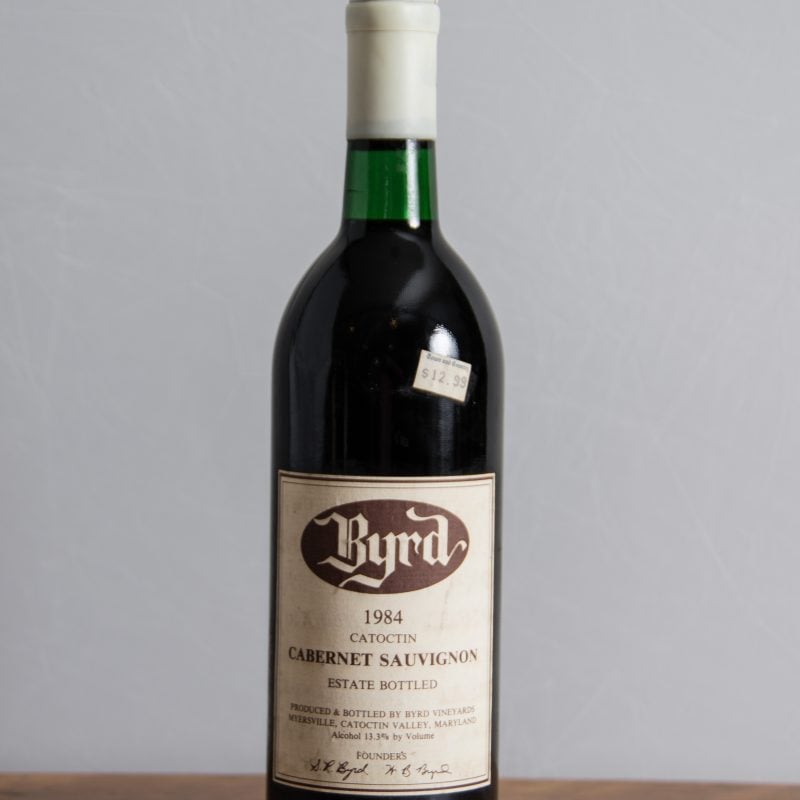 The same 1986 Wine Rack column article in the Easton Star-Democrat that informed me of the grapes blended in this 1984 Byrd Cabernet Sauvignon also said (very perceptively) this about it: “Classic, fruity, young cabernet nose. Medium fruity body with tons of tannin, incredibly long finish. Should have a great future.”

Well, here we are over three decades into the future. And we’ve just drunk (well, I drank it for you) this revelatory 1984 Byrd Cabernet Sauvignon.

The cork — some thirty years after it had been inserted into the ugly, punt-less bottle that was to be its (from the cork’s point of view) eternal home — was in superb condition. One little wedge came off (but did not enter the bottle). I was surprised at the cork’s obvious high quality (firm yet supple) and the restrained good taste of the information imprinted on it: only the word BYRD, in a striking, classic sans-serif typeface.

The color of the wine might at first have announced it as an (almost) young red wine: a deep crimson, until it was held under light against a white sheet of paper. Only then did there become visible a diminishment of the deep red, fading into a kind of golden sunset at the tilted sides of the large Syrah glass.

The wine’s aroma rose out of that large glass and seemed to go not only up the nostrils but also around one’s entire head. The wine was not (by this time in its life) particularly tannic, but it was so youthful-tasting that I concluded it must be high in preserving and uplifting acidity. There was an astringent quality that I couldn’t lay at the feet of acidity and was not entirely pleasant when the wine was drunk by itself.

No worries. The astringency receded a bit later that evening when the wine was served with grilled butterflied leg of lamb and green beans. Either the wine or the lamb (but probably the combination) kept me at the table for so long that our late-evening plans were scuttled. That was just fine, because they consisted of going into another room and eating blue cheese and drinking Port. Hey, it was a Saturday night in winter. What else do people do?

As is customary with the tasting of wines (all of them old wines) for The Odd Bottle column, this wine was saved in modest quantity and kept around to be tasted for a number of days after it was opened. Such partially-drunk wines are generally stored in the refrigerator door, the reds taken out in time for them to return to room temperature (when room temperature is my favorite temperature — oh, does this get me in trouble — 16°C/60°F).

Three days passed before the wine was tried again at a meal. On the fourth day, at lunch with beer short ribs in tomato sauce, it was still going strong. In fact, the Byrd Cabernet Sauvignon almost (but not quite) overwhelmed this acidic, spicy, meaty dish.

It was subsequently tasted alongside other wines I wanted to test against it, none of them candidates for The Odd Bottle, though the 1975 Taurino Notarpanaro would have qualified had it not been a bit over the hill; and who can blame it at its age? It’s a super Salice Salentino from Puglia, a blend of Negroamaro and Malvasia Nera. The regular Taurino Salice Salentino is ubiquitous—we used to order it at the first Carmine’s in NYC, $6.00 a bottle on the wine list, and new vintages are now available retail for about $12.00.

Then we drank the 1984 Byrd next to a much younger wine: the 2011 Jean-Pierre and Claude Roux La Font de Notre Dame Rasteau. The Byrd, 30+ years old and many days opened, both outpowered and out-finessed this perfectly fine young Rhone (75% Grenache, 15% Mourvèdre, 10% Cinsault), celebrated for its “explosive palate.”

In a certain way, there was, for me, never anything quite like the Byrd Cabernet Sauvignon. I suspect this was not because I’d never had as good a wine, since I’ve had better, but because I knew that I will probably never have it again and you reading this may never have it ever.

At Byrd Vineyards, owners Bret and Sharon Byrd have had enough. Burdened by debt and unable to sell their property as a working operation, they have carved up their scenic hillside vineyard into eight building lots. Unless a last-minute buyer surfaces, bulldozers will soon be uprooting the vines that produce the finest cabernet sauvignon on the East Coast….“It just seems as if we’ve given it a good 15 years of our life and we haven’t seen much for it,” said Mr. Byrd. “It’s just a matter of economics.”