A Taste of Tasmania David was born in Tasmania (Australia) in 1942 and was subjected to basic English-style food until he left in 1963 for North America. Tasmania is sometimes confused with Tanzania (Africa) and often is thought to be a part of New Zealand (1200 miles to the east of Australia) and is known for Bugs Bunny’s friend Taz, the Tasmanian Devil who looks nothing like a real Tasmanian Devil. In actuality, Tasmania is an island state of Australia (just as Hawaii is a state of the USA) and it lies just 200 kilometers south of the southeast corner of what Tasmanians call “The Big Island” — the Australian mainland.

When he discovered it in 1642, Dutch explorer Abel Jansen Tasman named the island Van Diemen’s Land after his patron. Later it was renamed to Tasmania after its discoverer. The French came by too and gave a few places French names like Freycinet, but did not settle. The British lost their footing in the United States and settled by turning Tasmania into a penal colony for convicts banished from their homeland. Some romantic stories have been written about those convict times but in fact it was a cruel and terrible era.

The French decision not to settle there doomed the country to 200 years of British cooking. A sad part of the British presence was their complete annihilation of the indigenous Tasmanian aborigines.

After the Second World War there was massive immigration from Europe and the United Kingdom by people looking for a new start in life. Wine had been looked at with suspicion, and beer was the drink of choice. The Europeans brought their culinary skills and a taste for wine with them. The traditional Aussie learned there was more to bread than the simple brown or white high-top he was used to, and there grew a new interest in wine.

During the 1970s there was another wave of immigration, but this time from Asia. Today Australian food is best described as “fusion,” a wonderful blend of European and Asian based on the fresh produce grown in Australia. I offer the idea that the very best of this is in Tasmania.

I was born in Tasmania in the 1940s and witnessed a lot of what I have just described. When I left to live in North America, grapes did not grow in Tasmania. It was the “Apple Isle,” growing apples.

In the 1970s someone, probably European, noticed that Tasmania was 42 degrees south of the equator and that it had a climate similar to many of Europe’s grape growing areas. The word “terroir” was heard for the first time in Tasmania. Pinot Noir, Sauvignon Blanc, Merlot, Shiraz — all began to thrive, to win awards, and become famous. Australian reds are strong and earthy. I would describe the Tasmanian reds as being similar to what I found in Beaune (France)…think Pommard. Some whites remind me of Montrachet. Some remind me of the Mosel.

Let me take you on a virtual tour of Tasmania. The itinerary will be pretty much what I do on a return visit and I will drop a few names on the way. Starting in the north of Tasmania and then taking a drive down the east coast to Hobart will give you a visual feast and visits to each of the wine areas. The Tamar Valley is north of Launceston and has about 20 vineyards all accessible by a trip from Launceston which would be perhaps 200 kilometers (120 miles). I would suggest making several trips and not try to do it all in a day… go slow and enjoy. Do have a designated driver because the drunk driving laws are very strict. My favorite places near Launceston are the Stillwater restaurant and the Josef Chromy vineyard and restaurant. 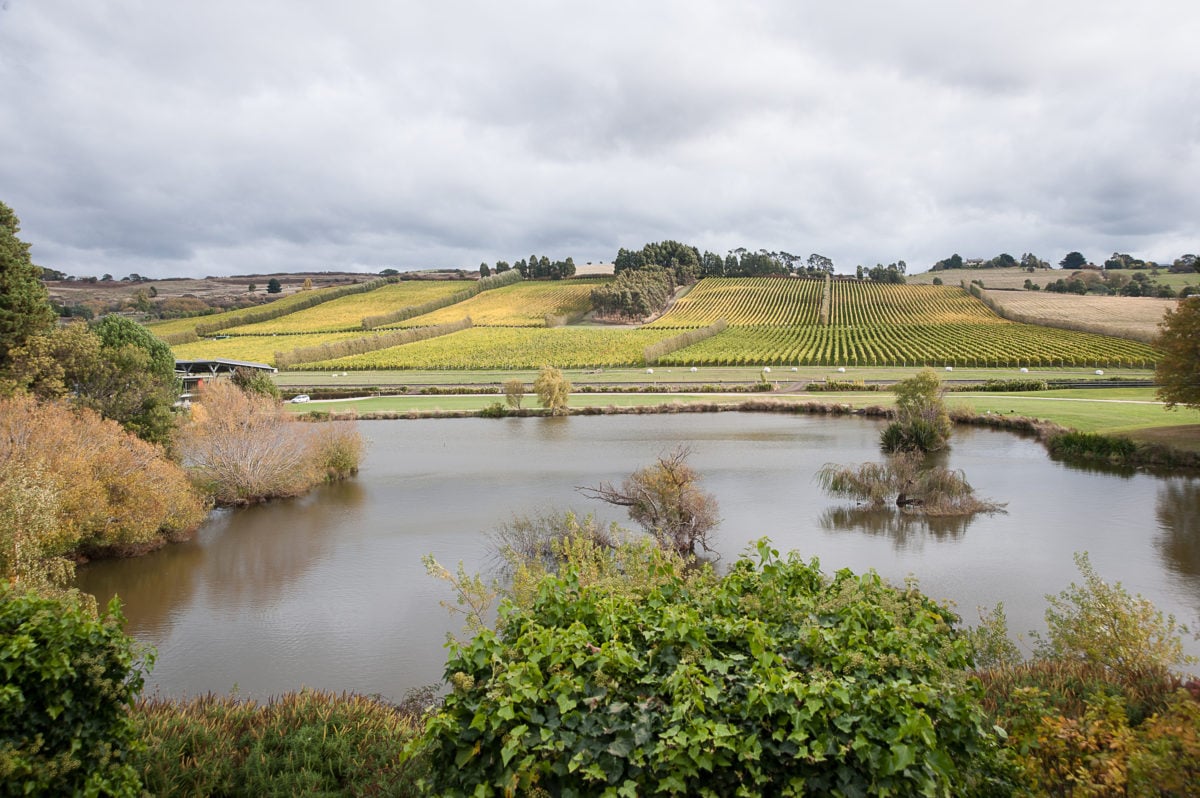 My favorite vineyards are Goaty Hill, Holm Oak, and Leaning Church. It was at Leaning Church I learned they prefer to bottle each vintage individually. The difference between a 2011 Pinot Noir and a 2012 is very distinct.

About 100 kilometers (60 miles) west of Launceston is the North West Wine Route. It is a smaller area than the Tamar Valley but it also contains some of the most beautiful scenery in Tasmania. A three-hour drive from Launceston will get you to Cradle Mountain via this wine area. The view is spectacular.

The East Coast Wine Route is, of course, on Tasmania’s east coast. Several vineyards in this area are worth a visit and tasting session… my favourite is Freycinet Vineyard. And having now mentioned Freycinet I must mention the Freycinet Peninsula and Wine Glass Bay. The wines are beautiful… the view is, too.

If you enter The Southern Wine Route from the east coast you will enter by the Coal Valley. Here you will find Frogmore Creek and Pooley Vineyards.

The restaurant at Frogmore Creek is spectacular. For a lighter meal try the Richmond Bakery.

If you are ready for really first-class restaurants, Hobart has a selection of them. Seafood is a specialty here. Do try the scallops or the crayfish. If you are interested in the history of the penal colony a visit to Port Arthur is a day trip from Hobart. There is lot more to see in the south and on the wild west coast. The landscape is unique and beautiful. But if your time is limited and you need to head back to Launceston it is a 200 kilometer (120 miles) drive up the midlands highway. Do stop at Ross and visit the Ross Bakery and sample goodies we grew up with such as Lamingtons and Hedgehogs.

Going back to Tasmania to visit is something I do regularly. To paraphrase my sister, who also left for North America but returned to live in Tasmania: I know why I left. I know why I go back.

But it is not all about the wine. Not all about the food either. The landscape is stunning and will offer views of seacoast, fields, and the mountains. If you are a foodie, an oenophile, or a “visualist” you will be in paradise. If you are all three your senses will be on overload.

David was born in Tasmania (Australia) in 1942 and was subjected to basic English-style food until he left in 1963 for North America. Living in Montreal for several years educated his taste for fine food and fine red wine. Living in Germany for two years later added to this appreciation. Exeter, New Hampshire has been home for several years and serves as a base for trips back to Tasmania and Europe. His photograph was taken while selecting wine for the wedding of friends Olivier and Marion in France (2011).