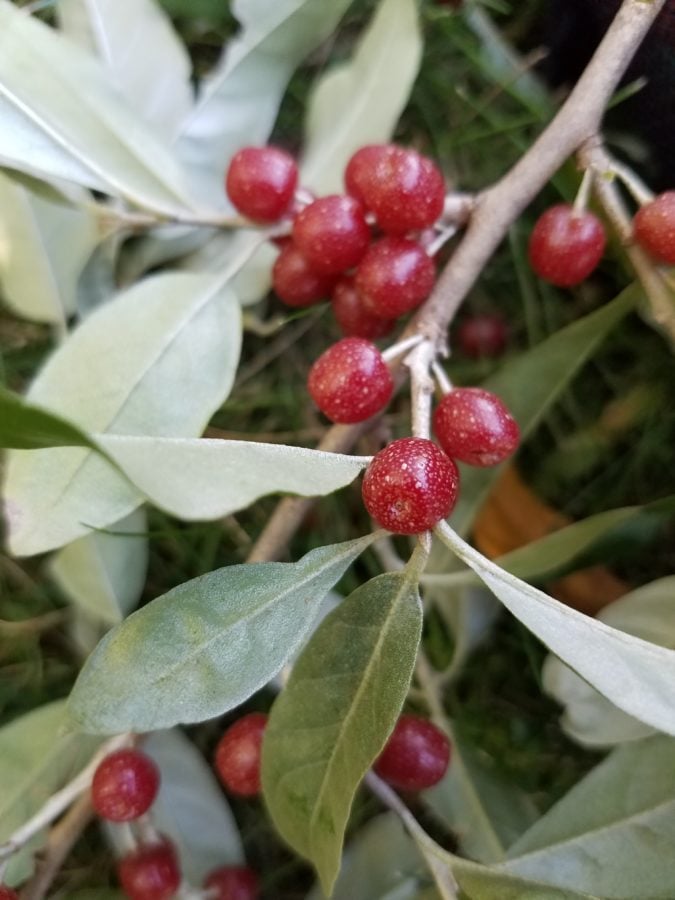 “Thank you so much for telling me about this, I have these bushes in my yard and I always hated them and thought the berries were poisonous!” exclaimed one of my students last night. I smiled. I am always excited when I can introduce people to highly nutritious invasive plants; it’s a win-win situation – as foragers, we get a seemingly unlimited supply of valuable food while the environment receives less seeds from an ever-encroaching invader. The highly invasive plant I am speaking of is Elaeagnus umbellata, or the Autumn Olive.

Autumn olive (now also called Autumn Berry) bushes were introduced to America from their native Asia from as early as the 1830s. They were promoted throughout the 1900s by the United States Soil Conservation Service as effective erosion control, and for conservation of wildlife. However, due to its hardiness, ability to grow almost anywhere, and the tasty berries it offers for birds everywhere, this large bush has proliferated to National Invasive status in most parts of the US and in Europe as well. Each bush/small tree can grow up to 3 meters (10 feet) tall and can produce up to 200,000 seeds per year. And it grows quickly, filling up areas where native plants have been eaten by wildlife, and taking control of disturbed areas like cleared lots and roadsides before native species can take hold.

Now for the good news – Autumn Berries are not only tasty and plentiful – they are extremely nutritious as well! High in vitamins A, C and E, these tangy, slightly sweet berries pack a superfruit-worthy catalog of nutrition. The phytonutrient Lycopene is up to 17 times higher in these little fruits than in raw tomatoes. Other compounds with antioxidant effects like betacryptozanthin are up to 10 times higher in Autumn Olives than in oranges and tangerines. Even the seeds contain Omega 3s and Vitamin E, so go ahead and chew them up along with the berry: they are soft and easy to chew.

Autumn Olives aren’t actually an olive, or a berry at all – they are a stone fruit, like cherries and peaches. If you want to find some in the wild you won’t have to look very hard – they are anywhere disturbed soil is. So look in vacant lots, dirt roadsides, property edges, trail sides and parks. They flower from May to June, with white to pale yellow, trumpet-shaped blooms which are not very fragrant, unlike their sometimes poisonous look-alike, honeysuckle, whose trumpet-like blooms are sweetly fragrant. You can also tell the difference between Autumn Olive and honeysuckle by looking at the leaves. Each entire, ovate, smooth-edged Autumn Olive leaf grows alternately down the twig, whereas honeysuckle leaves grow oppositely on the twig. Even more noticeable to me, however, are the beautiful, almost magical silvery scales on the back of every Autumn Olive leaf, and strewn across the surface of every ripe, red berry like so much stardust. When the wind tosses the shrubs you can see the silver almost sparkle as each leaf turns itself over in the breeze. Each fruit, called a drupe, starts out hard and greenish, then turns orange, then finally bright red. When you harvest the drupes is up to your taste buds – they start ripening in September and can be harvested into November, depending on when the hard frost sets in. The earlier you harvest them, the more tannic acid the fruits contain, so if you like mouth-puckering, astringent fruit you can start gathering them in early September, but I prefer early October into November when the cranberry-like flavor gives way to a more pomegranate sweetness, with a hint of tomato.  After a frost or two the drupes become even sweeter and require less sweetening during preparation, but the tomato-like flavor gets stronger as well.

Choose shrubs that get a lot of morning sun, they tend to be more flavorful. Shrubs in the woods which don’t get much sun tend to produce only a few berries, so look in sunny areas and you’ll find bushes literally laden down with pounds and pounds of fruit! I like to have a bag or bucket underneath a branch to catch the shower of drupes as I run my fingers down the twigs. Be careful, though – about half of the twigs have a sharp spine on them here or there so run your fingers down with care! After harvesting you will notice you have picked up a bunch of leaves, twigs, and even some ladybugs in your bucket. We spread our berries out on trays and pluck out all the debris. My girls love finding the ladybugs!

So how do we eat these juicy, tart and tangy treasures? You can enjoy them by the handful raw if you find some ripened to your taste, or you can prepare them into a very useful puree that can be easily transformed into savory or sweet sauces, healthy smoothies, tangy jams and fruit leather. The fruit leather recipe below describes how to make the puree and you can stop at step 3 to use the puree in other recipes (like a banana yogurt smoothie, for example), or go on to create the fruit leather. My kids love it in their lunch box as a snack, and we also enjoy dipping the fruit leather in melted chocolate to make a decadent treat. 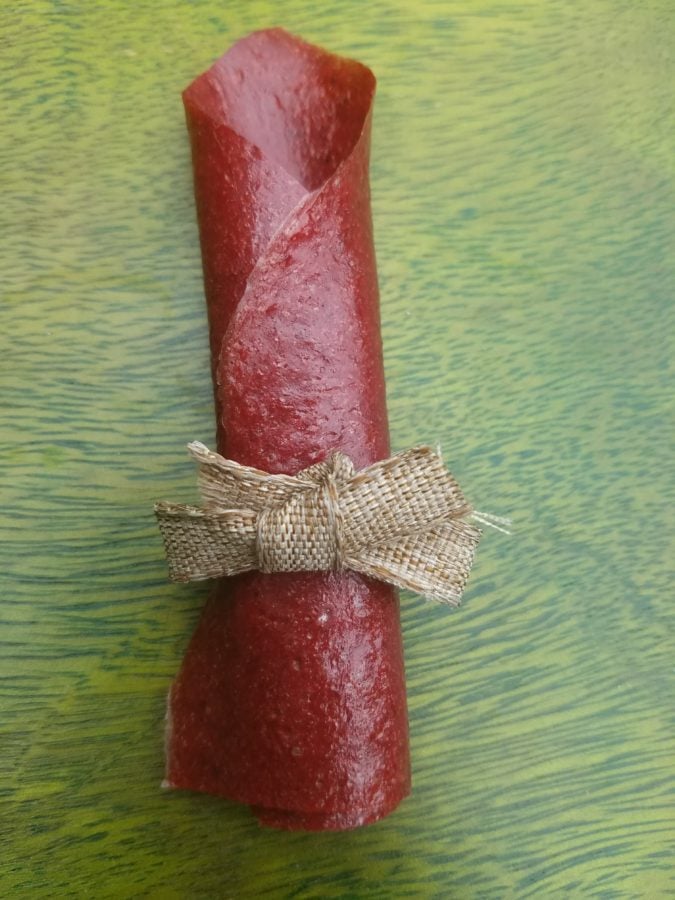 1. Stir berries in pot over medium-high heat until berries have burst and begin to bubble in their own pulp. Some berries will still be unbroken but burst easily when pressed between the side of the pot and a spoon.

2. Remove from heat and ladle into a food mill, passing them through the food mill into another pot or container. Put the seeds and pulp from the food mill aside. (You can use these to feed chickens or wildlife, the seeds are no longer fertile since they have been boiled. Use in your compost if you like.)

3. Add honey to the pulp to taste. If you harvested your berries early in the season you may have to add more honey. Be sure to put in at least some honey or your fruit leather will not be very flexible and will stick to the tray when dehydrating.

5. Cut roll into serving-sized slices (or bits to be used as salad topping, etc.) and store in an airtight container. If still tacky/sticky in some areas you can store in the refrigerator or freeze for long-term storage.