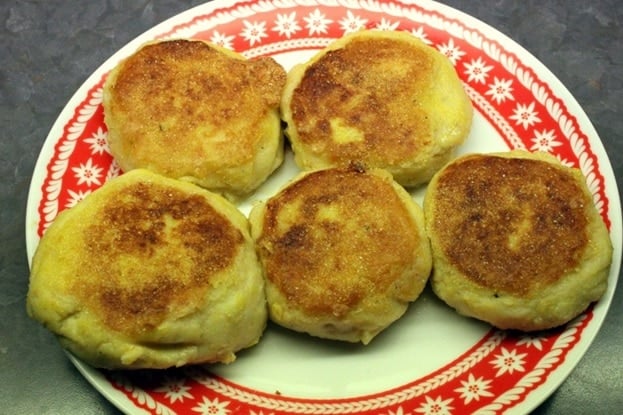 Stuffed potato cakes are much loved in my house! Often, I deliberately cook extra mashed potatoes, so we can make these potato cakes with the leftovers. No matter what you mix in they are always delicious — and served with a salad, they make a full meal. I make mine Cordon Bleu style, filled with ham and cheese. So that my daughter can eat them, I use gluten-free flour, but wheat flour works as well for a non-gluten-free version.

Or try to cook the Ecuadorian Llapingachos!

* For a non-gluten-free version, all-purpose wheat flour may be used.

2. Divide the dough into ten to twelve equal portions. Flatten one in the palm of your hand form a flat disk. Add cheese and ham and place another disk on the top. Shape it to be nice and round, making sure to seal it tightly on all sides.

3. In a large skillet over medium-high heat, heat about 2.5 cm (1 inch) of oil until a bit of corn meal tossed in begins to sizzle. Working in batches, fry the potato cakes, turning halfway through, until golden brown on both sides. Drain on paper towels, and serve hot. Wilma grew up in Switzerland, born to a Swiss father and an Italian mother. She married a Swiss and after living for one year in England they moved, 30 years ago, to Hong Kong. She has two grownup children, a son and a daughter. She is a craft teacher by profession, but soon cooking and baking took over. She has a food-blog, Pane-Bistecca.com,  and gives cooking classes in Swiss and Italian cuisine in Hong Kong and the Philippines, where she is planning to move.