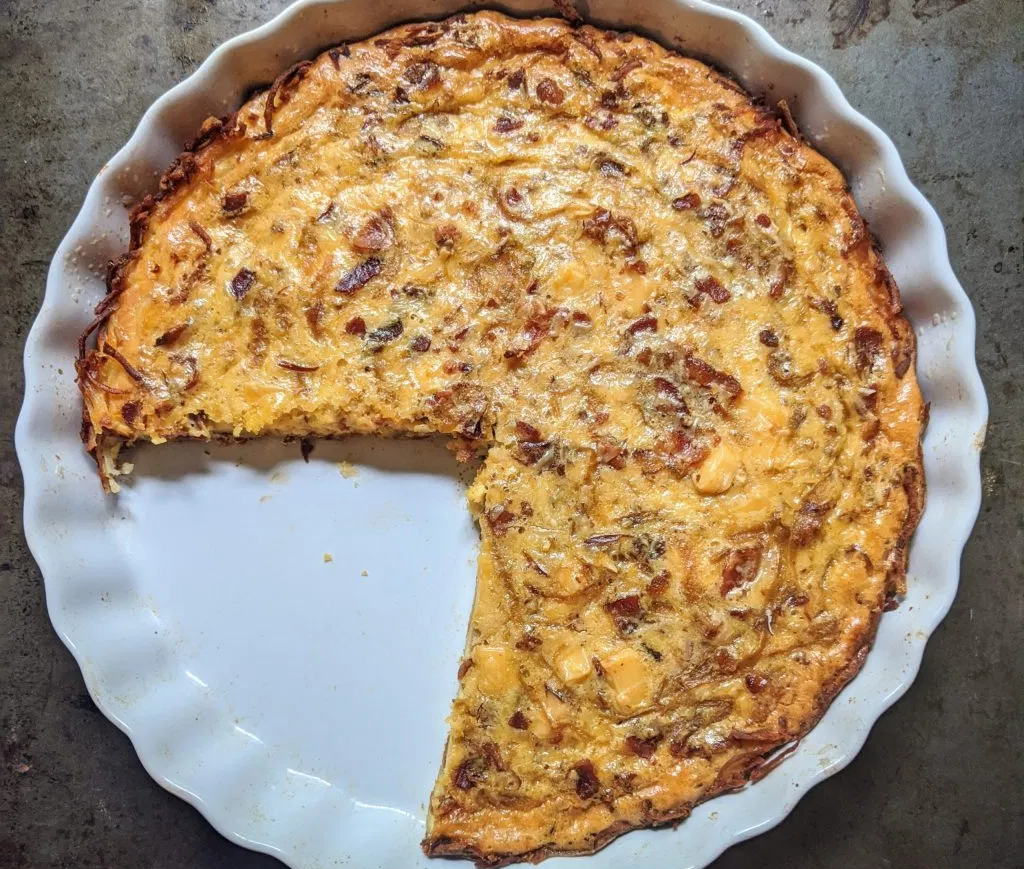 My husband thought of this recipe and I made it happen for him. I posted a picture of it on Facebook and friends asked for the recipe. I’ve gotten more messages from friends about how amazing it was than any other recipe I’ve ever written. (Pats self on back, lol.) Honestly, what’s not to like? A yummy hash brown crust is filled with creamy eggs with smoked Gouda, sweet caramelized onions, and savory bacon. Unless you don’t like bacon, in which case you can skip it! The star is actually the caramelized onions because they give this quiche its incredible flavor. This is great for breakfast, brunch, lunch, or dinner. Any potluck would benefit from this unusual dish. I hope you love it as much as we do.

*I cook it in the oven while the crust bakes.

2. Heat vegetable oil in sauce pan. Spread onions across the bottom and sprinkle with 5 cm (1 teaspoon) of salt. Cook, stirring occasionally, until onions begin to brown. Add 237 ml (1 cup) of water and cook until water evaporates. Reduce heat to medium and cook, stirring, until the onions are golden brown, like the color of a caramel candy.

3. In a mixing bowl, combine the eggs and Half and Half. Add 118 ml (1/2 cup) of the caramelized onions, the chopped crispy bacon, and the grated smoked Gouda. Pour into the hash brown crust and bake at 177°C (350°F) until it puffs up and is set. Serve warm.

Adrienne Brizzi Cirillo is a personal chef and recipe blogger at 88 Peas. Adrienne began cooking for her family at 9, because her mother hated cooking and she was tired of restaurants. Growing up, she started watching cooking shows on PBS and then Food Network. Food is her way to be creative every day and she believes in putting as much care and love into a simple omelette as she puts into more complicated recipes. Anything can be made more delicious with a little know-how and effort. She lives in Mahwah, NJ with her husband and three amazing stepchildren, and their dog Jinx, who are always happy to taste test new recipes and ideas. Jinx won’t eat pasta though.