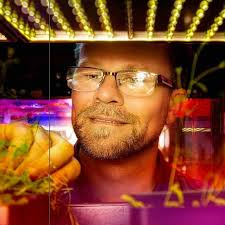 At the University of Florida laboratory of Kevin M. Folta Ph.D., studies are being conducted on how light and specific genes affect the flavors, nutrition and quality of small fruits and microgreens. Scientist or tech picks a cress sprout from a test jar for analysis.

The question of GMO food safety comes up all the time, and because I am a public scientist it has been something I’ve studied for decades. Modern technologies have tremendous potential to do good things for farmers, the environment, the needy, and food enthusiasts — but only if they result in foods that are perfectly safe to eat. I’m extremely concerned about food safety, both as someone raising a teenager and as a rapidly aging athlete doing everything I can to keep my ever-diminishing edge. That said, I don’t worry about consuming GMO foods.

Quite to the contrary, I have a lot of confidence in these products. Maybe it is because I understand the technology that brought them about. Humans have done a lot to change plants from their natural state, converting what were rather useless weeds and bushes to productive food crops. These improvements were performed by breeding and selection, that is, crossing plants and cultivating the best traits of each generation. This process is certainly genetic modification in the truest sense of the term, as much genetic information is mixed in ways we can’t easily predict or understand. Plant breeders are scientists who shuffle the genetic deck to find the rare outcomes that gave us our most useful varieties.

In the 1980s scientists moved one gene between very different organisms. The gene was the human gene for insulin and it was moved into bacteria so they would produce 100% human insulin for medical applications. This was a good example of what scientists call a “transgene,” the scientifically precise term for “GMO,” which seems to mean something different to different people.

In the 1990s plants were engineered with a single trait transferred from a bacterium to a plant. One example comes from a pesticide used for organic produce production. The pesticide is a bacterium that produces a compound that is toxic to caterpillars. The gene encoding the anti-caterpillar compound was cut-and-pasted from the bacterium into the plant, allowing the plant to manufacture its own insect protection. The result was that the need for insecticide application on corn and cotton was cut by much more than half.

Many were wary that a compound that harms caterpillars was in their food, and that’s understandable at first. However, we need to remember that plants produce many compounds targeted at insect pests, mostly because they have to defend themselves from pest pressures. The anti-caterpillar compound here is a protein that selectively targets a mechanism only in caterpillars. It does not work on most other insects and certainly is safe on birds and mammals, including humans. In us, the protein is broken down just like the other 40,000 plant proteins we consume. To the caterpillar it’s poison, to humans it is nutrition — in the same way that chocolate, grapes, and raisins are toxic for a dog but not harmful to people. This example is just one of the genetic innovations that allow farmers to grow food more affordably with less insecticide, fuel and labor. These technologies have been safely used for over eighteen years without a single case of a health problem ever reported.

So why do people say it is so dangerous? There is always a minority resistance to new technology. Some folks just don’t want change, others see an opportunity to capitalize politically or financially from manufacturing fear. Today you’ll see authors, TV doctors, and highly-paid seminar speakers propagating and profiting from a message condemning transgenic crops. But this sentiment runs counter to the scientific consensus of the world’s independent scientists and our most-recognized organizations. The words of fear on websites and internet memes have a damaging effect on public perception.

Sadly, the difference between the science and public perception slows the release of new transgenic technologies that could be extremely helpful. In the United States, new technologies exist that could help our farmers grow food with less fertilizer and water. Vitamin A, iron, or folate-enriched crops would save countless lives in the developing world. Fruit crops not requiring fungicides would be of great value to the environment. Other genetic modifications help provide consumers with higher-quality produce that lasts longer, meaning less waste.

These solutions exist now, languishing on shelves or stuck in endless, expensive deregulation, or abandoned because of fear from public backlash.

As a scientist, my job is to solve problems, and there are thousands just like me working on new innovations for agriculture. Our biggest frustration is that we’ve done a good job; we’ve created new technology that can remedy major problems we all care about. Unfortunately, the schism between what the science says and what the public believes keeps the best technologies from those who truly need them.

Kevin M. Folta Ph.D. is a Professor that studies how light and genetics affect flavors, nutrition and quality of small fruits and microgreens. He is an established science communicator, especially in the area of genetic engineering, and hosts the Talking Biotech podcast. Kevin helps his wife produce fruits, vegetables and eggs on their farm in Archer, FL.