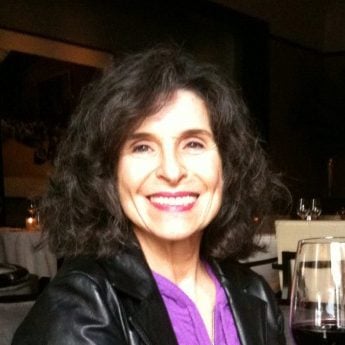 Fast Easy Fresh was the name of a column I contributed to that ran every month in Bon Appétit from October 2004 until April 2011. So by the time my steak salad recipe was published in April ’09, I’d been creating three or four recipes a month for the column for four and a half years. By then it was easy for me to ‘dream up’ recipes in my mind that took less than 45 minutes, had fewer than 10 ingredients (a requirement of the column), tasted great, and looked great. Testing the recipes should have been simple too, but never was. The recipes developed one ingredient and one decision at a time.

In this recipe, the first decision was that the strips of meat would have to be rather thin, so they wouldn’t appear heavy against the greens. I chose skirt steak, which cooks quickly, and cuts easily into slender, tender strips.

Next, I needed potatoes and greens. Yukon golds were my favorites then, and I always loved how sophisticated watercress seemed. I settled on grape tomatoes and sugar snap peas to round out the salad. Both are dependably available (another bottom line for the column), colorful, and prep-free. Plus the snap peas added crunch, which the salad needed.

So far, so good, but the ingredient countdown showed only 5 ingredients left. The dressing had to be a transparent oil and vinegar, so it wouldn’t obscure the colors; 3 left.

Now seasoning the dressing was a challenge. Garlic and shallots were no-brainers. Dijon mustard would have been an okay choice, but it was predictable and would have made the dressing a little cloudy. I’ve always believed that it takes just one ‘sexy’ (that is, unusual) ingredient to distinguish a recipe. For inspiration, I’d sometimes walk the produce department, the aisles, or the deli. As I was thinking this over, I recalled a potato gratin I’d developed years before. Its standout flavoring was horseradish. And I decided to use it again with these potatoes (stealing from myself isn’t so bad, right?).

The last part of the process was to actually cook the recipe and make more decisions: sauté, grill, or broil the steak? Cook the sugar snaps? Use which oil and which vinegar? How much of each ingredient? Honestly, it’s exhausting just to describe the process. But when the recipe was finished, it actually was quick and easy — for the reader. 1. Mince garlic into a small bowl. Whisk in horseradish and vinegar, then 6 tablespoons of the oil. Season to taste with salt and pepper. Mix in sliced shallots.

2. Steam potatoes until tender, about 12 minutes. Place in a large bowl and let cool slightly. Add tomatoes and sugar snap peas to potatoes, and gently toss with enough dressing to coat. Season to taste with salt and pepper.

3. Sprinkle skirt steak with salt and pepper. Heat remaining 1 tablespoon oil in a large heavy nonstick skillet over high heat. Sear steak until crusty and medium-rare, 3 to 4 minutes per side. Transfer steak to cutting board and let rest 5 minutes. Thinly slice steak on slight diagonal across the grain.

4. Divide the watercress among 4 plates; drizzle with more dressing. Top with horseradish potato salad, then steak slices. Serve with remaining dressing alongside.

Selma Brown Morrow, a food editor at Bon Appétit Magazine for 25 years and cookbook author, is a freelance tester and recipe developer for TV celebrity chefs, restaurants, and numerous publications. She can be reached at [email protected].