How My Mother Taught Me to Become a True Cook 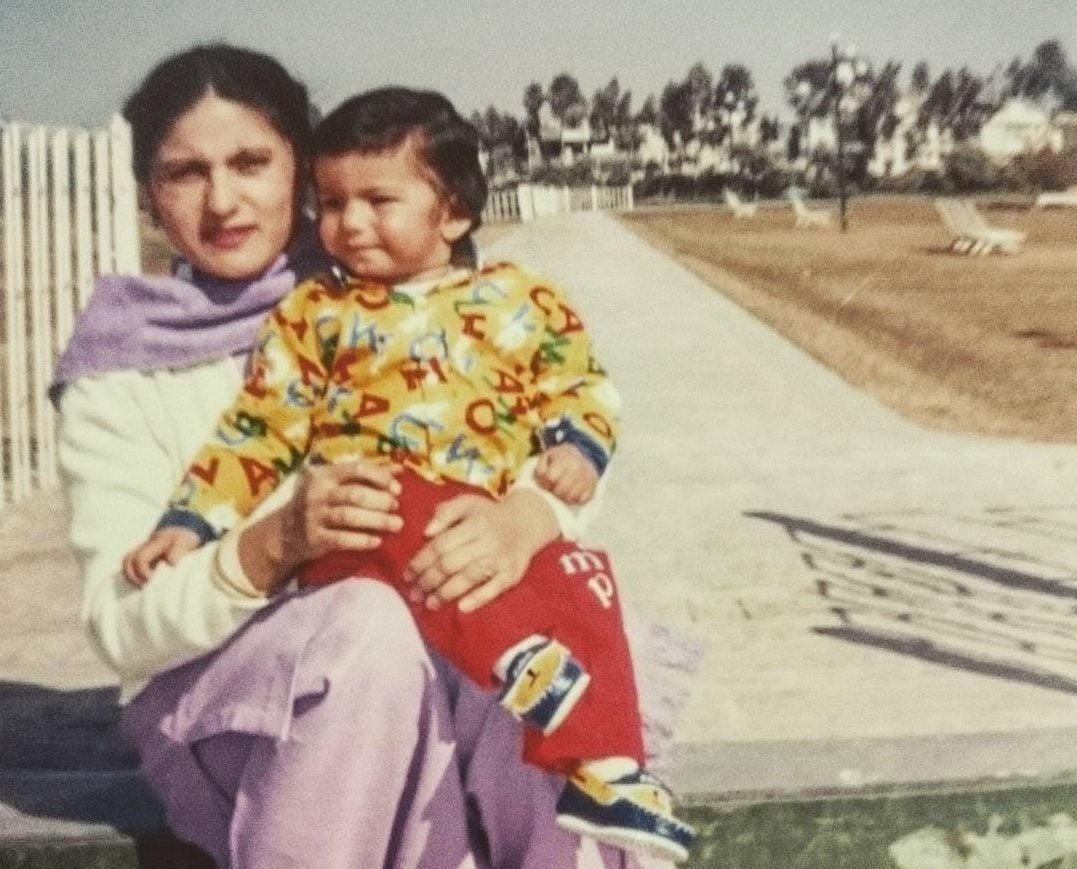 The author as a boy, sitting with his beloved mother. Courtesy photo

Mothers are the first teacher of all of us. Even the ones who are not raised by their biological mothers are raised by women who have the right to be called mother. There is a Pakistani proverb that says, “The one who raises you is greater than the one who gives you birth.” I am fortunate enough to be raised by my birth mother, my first teacher and the dearest human to me even now after she is no more. At an age where I have had many different relationships I realize that nobody loved me like she did.

I am a part-time chef and I run a YouTube channel by the name of Chef Shamsher and how I got the title chef is all because of my mother. The story is a bit tragic and that’s why I have never talked about it publicly but today I will not hold back.

In April 2010 my mother was diagnosed with stage 2 breast cancer. She was a delicate soul and chemotherapy was very harsh for her but there was no other way to go through it. Because of her treatment she was prohibited to enter the kitchen by the doctors. No one in the family was willing to take care of her but I decided that I would leave everything and stand by her.

Domestic help costs very little in Pakistan, so it was no big deal to hire a cook who would make food for my mother and her family. Mother never liked what the cooks made and it was not suitable for her because she wasn’t allowed to eat even a tad bit of spicy food. Though we tried different cooks but they either weren’t good or they would end up stealing mother’s belongings. She was tired of this but she never allowed me to do the kitchen work. When she was in recovery I urged her to let me cook because we were eating food from outside every single day and it was not easy on the pockets. She had no choice as she was clinically depressed after her treatment. She was so agitated at times that she had to be sedated in order to be normal.  So learning to cook for me was more of a need of that time, it was a necessity.

I remember the first thing that I made was “Murgh Channa,” which is curried chicken with chickpeas. I did not even know how to cut vegetables at that point. Luckily a friend dropped by at that time and helped me in cutting vegetables. From that day and for the next three years I cooked every single day, sometimes waking her to get instructions for different things that I was cooking.

As she grew stronger, Mother taught me a lot of Pakistani food. Biryani, palak goasht (goat in curried spinach), pilaf, Lahori fried fish (gram flour fried fish), and how to cook several vegetables. Then she started teaching me different recipes from around the world. Chicken Manchurian (which is a very famous Pak-Chinese recipe) with fried rice, along with macaroni and cheese.

Mom took the kitchen back in late 2013 after her full recovery, but on the weekends she asked me to cook for her. Since I was working, I had enough money to try something new and special every week. I started putting photos on social media of whatever I used to make and I used to get slight criticism over my garnishing. So I went to a couple of restaurants and snuck into their kitchens to see how they presented different things. I started watching cooking videos and tried to learn about garnishing from there as well. A friend suggested that I start a blog so I began ChefShamsher.blogspot.com and it gathered some popularity among the people of major cities of Pakistan. In a couple of years I had more than 160 recipes posted and the blog’s popularity brought opportunities to write for famous newspapers and magazines in Pakistan as a food critic. Then in October 2017 a friend convinced me to buy some camera gear and start making videos of my recipes. I now have my own channel with more than 50 video recipes.

Mother was my best critic. She never held back if there was anything she didn’t like. She straight away would tell me to buy her a crispy chicken sandwich whenever she did not like anything that I made. After 2 years of cooking. She said, “You have finally started to cook like me.” She would often tell new friends, “My son is a chef and I say this because he has passed my level of cooking and I am the best cook in the entire family.” Which no doubt was true.

She was also generous with it as well. She used to distribute whatever she used to cook among our neighbors and there were a couple of homeless people who used to come regularly to her once a week. She never sent anyone away with an empty stomach. I could write a whole book on what an amazing human being my mother was. I don’t have the words to describe how much I miss her. For now I must stop myself and wipe my tears. One of my favorite recipes of my mother is Qeema Mutter. Whenever she used to make it I ended up eating most of it. This usually led to a scolding session by her, but then I would praise the dish so much she wouldn’t say a word after that.

1. Heat oil in a nonstick pan and fry onion. Add salt, red chili powder, and ginger and garlic paste. Cook until the water from the onion dries.

3. Add the minced beef and cook, covered, for 20 minutes. If using fresh peas, add them toward the end of the cooking time.

4. Uncover the lid and add the green chilies, coriander and, if using, frozen peas. If desired, season with lemon juice or garnish each plate with a wedge of lemon for squeezing.

Umar Mansoor is known as Chef Shamsher on social media, a name given to him by his followers. Umar started as a blogger but now has a YouTube channel with more than 50 video recipes uploaded in just the first six months. Profession wise Umar works in the corporate sector but also does home catering in Tulsa, Oklahom, USA. Umar is from Lahore, Pakistan and because of his cooking skills and social media popularity, has worked with famous newspapers and magazines as a chef and food critique.