I grew up in the 1940s in Toronto, Canada, of Bulgarian parents. Both of my parents were in the clothing business. My mother worked as a seamstress at home, and my father was a tailor in a factory. It was actually a sweatshop that made women’s coats and suits. The work was seasonal for most employees, who worked for six months on the winter clothing and then had six months off, but my father was a sample maker and was fortunate to have work year-round.

Because their life was hard, my parents didn’t want me to go into the clothing business, so I became a teacher. But I married a classical clarinetist and found myself living in Nova Scotia, where by chance I met a member of the symphony board who was in need of a ball gown. I made her a gown and went on to make gowns for other patrons of the symphony. The creation of my own designs led me to the design of knitwear, a career I enjoyed for over thirty years until my recent retirement.

When I was a child, the most special of occasions – Christmas and my dad’s name day – were celebrated in my home with my mother’s homemade baklava. In Bulgaria, a name day is the day — usually in honor of a saint — associated with one’s given name, and is even more important than one’s birthday.

My mother’s baklava was truly made from scratch – she made and rolled her own gossamer-thin dough. On baklava days, as my sisters and I left for school in the morning, my mother would be covering all the furniture in the living room with clean white bed sheets. When we returned at lunchtime each bed sheet would be covered with a large thin pastry sheet.

The filo (also known as phyllo) dough was a yeast-less dough rolled out as thinly as possible with a large clean, unpainted, section of broomstick. After the dough had rested for just long enough – while my sisters and I had returned to school after lunch – my mother cut it into rectangles to fit the baking pan. Between each sheet she sprinkled cinnamon and finely crushed walnuts. When the layers almost filled the pan, she cut them into diamond shapes, brushed the cut edges with oil, and baked the baklava until golden. When it was hot from the oven, she poured chilled sugar syrup across it to saturate it. It was allowed to soak for an hour or two, and was ready, by nightfall, for the family celebration. 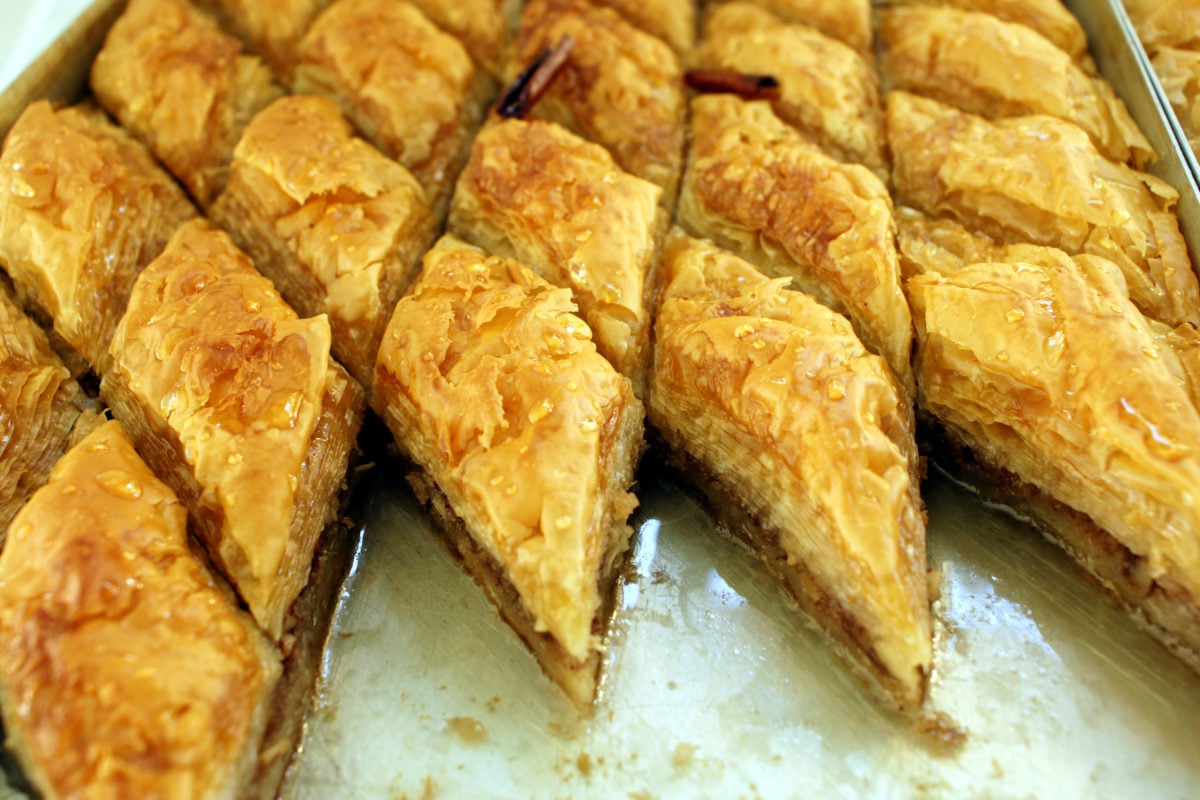 1. In a small saucepan, combine sugar with 946 ml (4 cups) of water. Place over low heat and simmer until the sugar is melted. Allow to cool and refrigerate until well chilled, about 4 hours.

2. Preheat oven to 162° C/325° F. Place the olive oil in a small saucepan over low heat; it will be used after the baklava is assembled and should be hot. Place two pastry sheets on the bottom of the casserole. Lightly sprinkle walnuts and a little cinnamon all over. Top with one sheet of pastry and again sprinkle with walnuts and cinnamon. Repeat until all the sheets are used, saving two unblemished sheets for placing on top.

3. Cut the baklava into diamond shapes, and immediately brush all the cut edges with hot oil. Bake until pastry is lightly browned and fragrant, about 1 hour. Remove from oven and immediately (and carefully) pour the cold sugar syrup over it. The entire baklava, including the top, should be saturated. (If necessary, adjust the position of the top diamonds.)

4. Cover lightly with waxed paper, and allow to soak for 1-2 hours. Drain and discard the sugar syrup. Cover and store at room temperature.

Vasilka Nicolova, of Bulgarian parents, grew up in Toronto, Canada. Although she had an early interest in fashion design, she became a teacher before chance led her to design and sew evening gowns for patrons of the Nova Scotia symphony orchestra. Her interest in design turned to high fashion and the creation of the Vasilka line of women’s knitwear. Now retired, she travels, gardens, and continues her lifetime support of the Tibetan Bon Foundation.