There are few kitchen innovations cleverer than a “lazy spoon” that has a notch or tab that lets it rest on the edge of a pot or bowl, dripping back into the vessel instead of counter or stove. Woodworker Jonathan Simons claims to have invented the lazy spoon, and indeed has the name trademarked. His cherry wood or maple Lazy Spoons are objects of art, beautifully designed in various shapes for stirring, straining, scraping or ladling. They are also available in left-handed versions, something deeply appreciated by leftys like me who are weary of using implements designed for a right-handed world. There are “lazy” spoons available from other makers, some in wood and some with silicone ends, but whether or not Jonathan’s spoons were the first, they are undoubtedly among the very best. 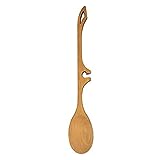