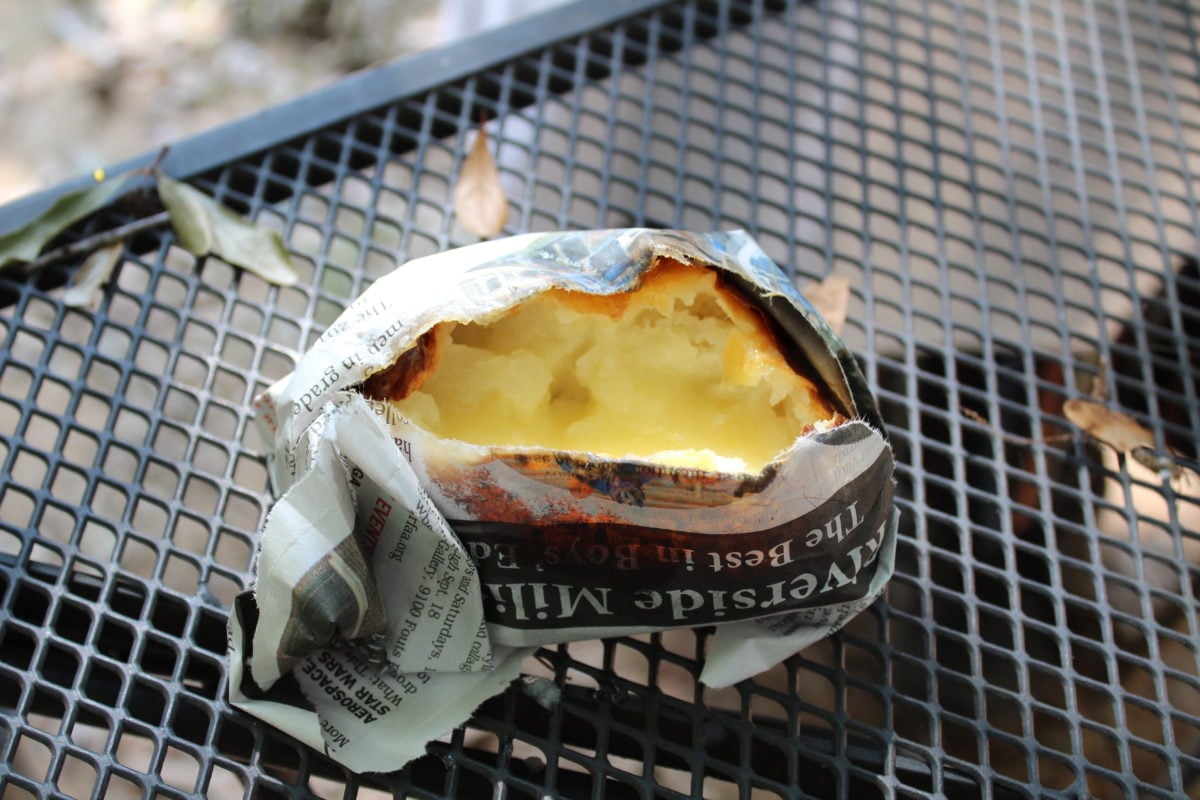 1. Start a fire in a pit and place the tripod over it. Make sure the tripod is securely hammered into the ground to avoid the rosin pot tipping.

2. Place the rosin into the pot, and put the pot of solid rosin over fire so it will melt. Check with a spoon to make sure that the rosin has completely melted on the bottom.

3. Once the rosin has melted, drop the potatoes into the pot. Begin by cooking three at a time until you are comfortable with your pot of rosin. You will see bubbles in the rosin as the water is being forced out of the potato. Watch carefully, adjusting the heat as necessary, to be sure that the rosin will not boil over into the fire.

4. Wait for the potatoes to float to the surface of the rosin, which will take about 1 hour. (Total cooking time will be about 1 hour and 30 minutes.) You can test a potato by touching it with a long handled metal spoon. The potatoes are hard initially but as they rise they become softer and almost spongy when touched. DO NOT BREAK THE SKIN; if you break the skin, you cannot eat that potato.

5. Once the potatoes rise to the top, which should take about 1 hour, allow them to continue cooking for another 30 minutes. Scoop one potato out of the rosin and wrap in newspaper. The rosin will instantly adhere to the newspaper. You cannot eat the skin. After a few minutes split open the potato through the newspaper and push the ends of the potato inward. If done you should get a nice fluffy little cloud of potato in the middle. Now you will know exactly how long it will take and if you can do more than 3 potatoes at a time. This is where you gain finesse.

6. If you want to make mashed potatoes that have a good potato flavor, leave the potatoes in the rosin until the ends begin to wrinkle. Wrap them in newspaper and split the potato open so that you can scoop out the insides. Add butter, cream, whatever you like for seasoning. Then mash or whip together. You will have produced a mashed potato dish that has real potato flavor in it.