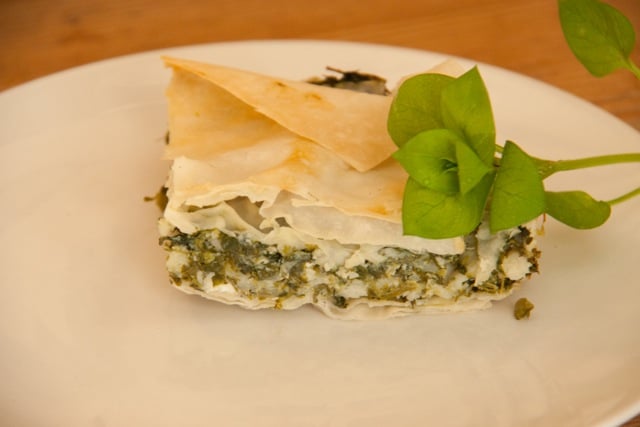 This recipe is featured in Spring Greens and Hortopita

1. Preheat oven to 177o C/350o F. Heat a few tablespoons of oil in a large pan and cook the leek and scallions until they are tender. Add the greens and cook to reduce, then remove from the heat and let them cool.

2. Once the greens are at room temperature, add the dill, feta, cottage cheese, and eggs, and combine thoroughly. Add salt and pepper to taste and set aside.

3. When working with phyllo dough it’s important to keep it from getting dry and brittle. Thoroughly wet a dish towel and wring it out. Use this to cover the phyllo as you work with it and you’ll prevent the dough from cracking into pieces. Spread your phyllo out on the counter and cut it to fit a 28 cm x 18 cm (11” x 7”) pan. Brush the bottom of the pan with olive oil and lay down a piece of phyllo. Brush the phyllo with olive oil and lay another piece on top of the first. If you’re using country style phyllo, you’ll use two sheets per layer. If you’re using thinner phyllo, you’ll need four sheets per layer.

4. Take half of the greens mixture and spread it evenly across the phyllo. Place a layer of phyllo on top and brush it with olive oil. (This is a delicate operation if you’re using the thinner phyllo.) Add one or three more layers of phyllo, depending on the thickness of your dough, oiling each layer. Spread the remainder of the greens on top of the phyllo and again, add two or four layers of dough, brushing each layer with oil.

5. Using a very sharp knife, score the top layer (or two) of the phyllo into rectangles. If you wait until after you’ve cooked the pita, the pastry may crack when cut. Scoring the raw phyllo makes for neater cutting later on.

6. Bake for 45 minutes or until the top layer of phyllo is golden brown and crispy. Remove from the oven and let it cool slightly, then cut and serve.